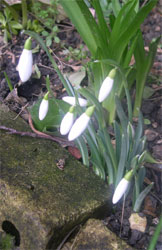 These are the first snowdrops in our garden. I spotted them near the gate when I was driving out yesterday. As there is so little else in the garden at this time of year, I treasure the snowdrops. When they get into full swing we usually have a few in an eggcup on the kitchen table, ours are all small varieties.

Snowdrops are massively popular nowadays. So much so that there is a real danger that all our wild snowdrops are likely to die out. Snowdrop thieves are plundering naturalised sites. This is a real cash crop. A small pot of three “in the green” costs around £5.00. My aunt (of fur lined wellingtons fame) had a pretty wood bursting with snowdrops. These were ravished every year by men in vans. Also there are now snowdrop snobs that only welcome certain types in their gardens. Some snowdrops are so special and so hard to propagate that a single bulb can cost £50.

Last spring I was working in a house owned by a charming couple who are avid alpine collectors (snowdrops and daffodils come into this genre). I’d never been into alpines, per se. I’ve no idea why but I’ve always linked them to nasty mounds of stones, concrete and gravel tended by grumpy old men. Until last year, this grumpiness had never been a surprise as it was hard to spot an alpine on these horrendous edifices without the aid of a vast magnifying glass.

These alpine collectors were enlightening. They had a gorgeous octagonal alpine house and the alpines that were dotted around the garden were planted in such a way as to make them attractive and accessible. There was gravel but not a hint of an amorphous mound and somnolent grizzly human, trowel in hand.

Our Cottage Smallholder snowdrops were supposed to be slowly spreading. Unfortunately, years ago, I was told to leave them alone. The alpine wife set me right on this. Just after flowering, when they are still “in the green”, lift each clump and divide them. Plant two or three bulbs in small groups and within a year or two they will quickly become large healthy clumps. They showed me what they had achieved, it was amazing. This was just after my snowdrops had vanished for the year. So I have been primed for eleven months. It’s been exhausting.

It’s very hard to get snowdrop bulbs that one buys in a pack to germinate, so if you want to introduce or propogate them in your garden take action within the next few weeks. Forget those tempting autumn packs, buy them “in the green” now. These are generally available from a good nursery garden or online. The season for “in the green” snowdrops is short. Ten years ago I turned this option down as far too extravagant. Now I see the error of my ways. Three pots of three bulbs with the right husbandry would probably be three snowdrop drifts by now.