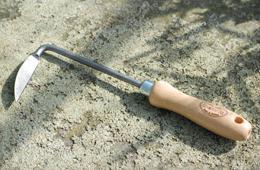 When I first moved to the cottage my mum told me that I needed to scratch over the surface of all the herbaceous borders with a hand fork in the spring.

“It lifts the soil, lets it breath and avoids compaction. Ideally you add some fertiliser to give it a bit of a boost.”

The next year I scraped and boosted. I probably followed this advice for at least three years and everything flourished. The borders were smaller then. But as they increased in size I ignored this pertinent tip. Using a hand fork is hard work on the wrist.

It’s easy to see whether your herbaceous borders need this fillip. Moss (in particular), chick weed, baby nettles and buttercups growing indicates the need to reach for the hand fork immediately. Or perhaps not if you have a Cape Cod Weeder to hand and are pressed for time.

Today, in two hours I went over the surface of at least 50 square meters. I was also spreading a mix of 75% concentrated farmyard manure and 25% bonemeal, burying it quickly as the Min Pins were on Red Alert. They have been discovered eating the concentrated manure that was spread over the top of asparagus bed. Yuk. In fact we spent an hour out with torches recently, looking for The Contessa who had vanished after supper. Presumably looking for something a little more pungent and altogether more tasty and revolting than her diabetic food. The concentrated manure ticks every box on that front.

This afternoon my hand fork stayed in the shed. My trusty tool was the Cape Cod Weeder. This is my favourite tool of all time, weeding with it is super fast but it doesn’t stop there. It’s so light that stones are removed with a flick of the wrist. It can slash through soil to break it up and mix in fertilisers. Today I felt like the gardening equivalent of Bruce Lee. A handfork requires a hefty dig in and lift. A Cape Cod Weeder just glides, slices and chips away. A seamless operation that makes me feel good. I did buy the tool after all.

And best of all it self sharpens as you use it. All the De Witt gardening tools are a pleasure to use, perfectly balanced and ergonomic so you don’t waste energy maintaining your plot. If you want to turbo charge your herbaceous garden maintenance why not invest in a Cape Cod Weeder? You’ll never regret it, I promise.

When dusk fell I wiped my Cape Cod Weeder with an oily rag and bought it into the kitchen. Now that’s true love in my book.