Suddenly The Bike was our only means of transport

Posted by Fiona Nevile in Save Money | 18 comments 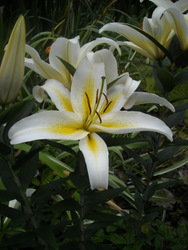 “Have you got a fiver?”
“No. Well yes. What do you need it for?”
“The man is coming to collect the car for the M.O.T.”
“But I need the car to collect Inca from The Animal Health Trust and I’ve got to pick up my prescription from Newmarket – I can’t go all weekend without pills.”
“Don’t worry. We’ll figure out something.”

I thought and thought and the only option I figured out was bike shaped. I would cycle into Newmarket on my bike. It’s only a six mile round trip. The problem is that apart from a few flicks up the road to John’s shop (a ten minute walk away) I hadn’t really bothered with the bike. Gardening does make one fit but this requires muscular thighs and then there was the question of the razor sharp boy racer saddle.

I had to cut the brambles that had grown between the wheels and pump up both tyres. This alone was exhausting. Finally wobbled out of the drive and started my journey. The road through the village and down to Newmarket is a gentle slope. Easy on the thigh muscles but the slim boy racer saddle was soon making its mark – it felt that I had been molested by King Kong’s big brother. So it was a huge relief when I reached the town and locked the bike to a sturdy iron structure. With rather shaky legs I tottered off to the collect the prescription.

I’d bought my bag, a large over the shoulder and across the body affair. A real cyclist’s bag that had been given to me by my old friend Max, years ago, when we were working together in London. Once again, my hoarder instinct had paid off. This bag is handy as it holds the cycling helmet when off piste and shopping on foot until it’s time to ride home. But there’s the rub. Even though the hills back home are small, they are still hills. Would I have to push the bike all the way back home?

I stopped at the cycle shop and bought lights and mud guards. Just in case there were problems with Danny’s car. This week I’m looking after The Chicken Lady’s smallholding for a few days and the bike, despite the uncomfortable saddle, is a must. I surprised myself and cycled most of the way back home – enjoying the opportunity to examine the front gardens as I sailed slowly by.

Yes, on my return I discovered that there were problems with D’s car – we have now been carless for three days. The bike was pressed into action twice yesterday to get essential supplies from John’s shop. But by the end I began to loathe that razor saddle.

TCL and S drove me to the AHT to pick up Inca at the end of the day on Friday. Thank you so much! And for once Inca didn’t weep all the way home, she was too interested in the horsey paraphernalia on the back seat.

This morning I logged onto Amazon and ordered a women’s bicycle saddle that was one of the cheapest with good reviews. I also decided that I will use the bike as often as I can for short local trips so that next time there’s an emergency I’m “bike fit” to tackle it. If there is a car permanently at hand it’s so easy to take the lazy option. Last night we sat down and worked out how much money we have spent on The Bike so far – original deal £10. Inner tubes, tyres, repair kit, oil, helmet, lights, mudguards, saddle £140.00. Yes I could get an old banger for or even a new bike for this money. But I’m delighted with my bike (which was a good quality bike in its youth). It needs no petrol and I can maintain it myself – in time it will pay for itself over and over again.

And it’s actually fun to ride!