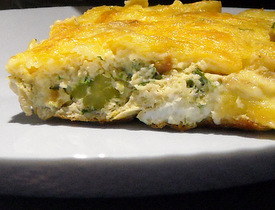 Well I finally cracked it. My meat loving partner announced with delight.
“That was the best frittata that I’ve ever eaten. I’d be happy to eat it twice a week.”
“Did you realise that it was entirely vegetarian?”
“No. It was just sublime.” Thoughtful pause. “I don’t care about the meat and still would guzzle this twice a week.”

A result! I’m trying to cut down on our meat intake. Healthier and cheaper meals. Delicious is a bonus.

The magic ingredient was rocambole . I had never used this before but after I reckoned that we’d have to finally just have to try it. Rocambole actually grows in our garden after all. It was unknowingly introduced by me from a plant swap. The Londoner declared
“It has little white bell shaped flowers and smells strangely of garlic.” 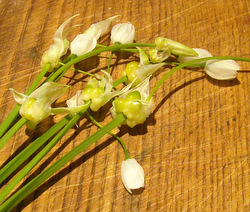 Everybody harps on about wild garlic. I bought some bulbs last autumn and they didn’t survive. I’m determined to try them again as I didn’t give them much of a chance – clay soil that I needed an axe to break – I reckoned that they just rotted. This time I’m going to plant them beside the Rocambole, in good leaf infused loam; hopefully they will race away in this shady wooded patch of our garden.

Meanwhile disappointment drew me to taste the Rocambole. I nibbled a stalk straight from the patch. It tasted like very strong chives with a garlic kick. I beetled inside to double check which other parts were edible. I was delighted that the leaves are edible too!

Tiny hands clapped with glee. Anything that is not savoured by us this spring will be mixed with butter and frozen in ice cube trays. The flavour is exceptional and will lift any number of dishes later in the year. The butter stops the herbs going all squishy.

Racombole has a bit of a poor press. It grows rampantly around the village. But as so few people mention it as a foodie treat I had never bothered to taste it until this week. Now I feel like the first miners that discovered gold and just wish that we had tasted it over the past 15 years.

If you would like to try growing racombole, I’ll post a few bulbs to the first three people who comment on this post. It will be in two or three month’s time when they have flowered and the leaves have shrivelled away leaving the bulbs enriched and ready to propagate in your garden.

Ingredients:
2 tbsp of olive oil
250g-300g of new potatoes. Washed and simmered until cooked and then cut into 1cm-2cm pieces
6 large eggs (or 9 bantam eggs)
100g of mature Cheddar (cut into 1 cm cubes)
30g of mature Cheddar  grated for the topping
10 stalks of racombole (including the flowers and bulblets chopped)
A large hadfull of fresh parsley (that is washed and then chopped)
Salt and pepper to taste

Method:
Boil the new potatoes and drain well.
Heat the olive oil in a sauté pan (medium heat, lid on)
Meanwhile crack the eggs into a large bowl, beat until all the ingredients are mixed thoroughly.
Add the cubed Cheddar cheese and parsley and racombole and stir gently to disperse.
Pour the egg, herb and cheese mixture into the hot sauté pan and immediately lower the heat (our hob has settings from 1-9 so I chose 2).
After a minute or so place the sliced new potatoes on top and sprinkle the grated Cheddar cheese over them.
The frittata will take about 20- 30 minutes to cook. After five minutes or so use a fish slice or spatula to lift the frittata away from the surface of the sauté pan (just a few millimetres so that you can peek at the base). If it is golden brown turn the temperature down to one so as not to let it burn. Lift the frittata in the same way every five minutes or so.
After 20 minutes or so it should be cooked through – I generally put a frittata under a high grill to brown the top.
Season to taste and serve on warm plates with some salad leaves if you’d like. A good beer goes very well with this.