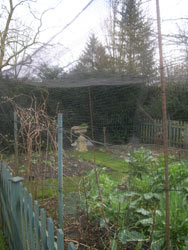 I’ve always fancied having a walk-in fruit cage. The sort supplied by Harrod Horticulture, with a sturdy ‘easy to assemble frame’ and nets without rucks. I’ve gazed at the pictures on their site imagining that I am the slim woman in jeans, opening the door, large trug in hand. Beyond her the bushes are bursting with fruit.

These cages are expensive. Whilst waiting for a windfall, I bought some cheap nets two years ago and laid them over the canes when our crop was ripe and attracting the local birds. I didn’t realise that unripe berries are also extremely palatable. I threw on a net to protect the one remaining berry on a redcurrant bush.

Last year I discovered that if you throw on nets too early, the bushes grow through the nets and the exposed canes fruit prolifically. It’s also hard to gather of crop of berries under a low net as it seems to snag any extremity. Your spectacles, nose, buttons and shoe laces can all stop acceleration in an instant. Last year I gave up foraging under our nets towards the end of the season. It was too much of a palaver.

A few days ago, when I returned from work to find our would-be Houdini, I had three hours of freedom before dusk. I decided to tackle The Raspberry Cage Problem.

I’ve been putting this off as there are two major defects in our raspberry patch. Pathetic use of netting and I have mixed early, mid season and autumn fruiting raspberries in the one bed. I imagined drifting down the row from June to September, gathering baskets of raspberries.

Mixing them in the same patch is total lunacy. The canes throw up new canes each year and spread quite quickly. After a few years it would be impossible to differentiate between the two strains.

For the past two years my laziness has allowed all canes to romp away. This was my last chance to rein in the runaway coach. Some canes still had their labels. A few canes had no label. I cut down the autumn fruiting ones and trimmed the summer fruiting varieties as they had shot up and were totally out of hand, although I knew as I snipped we would be loosing a few kilos.

Two years ago I had put in some sturdy poles and wires to support the heavy trusses. Most canes had stretched away from them so I was able to guide them towards this structure. Supported they will fruit far better. Like us all.

This year I need to tag the unmarked canes when they bear fruit and mark them clearly so that in the autumn they can be separated.

With just an hour to go before dusk I ventured into the barn, looking for supports to make my cage. I was planning to check Freecycle for fruit cages, so this was just a cursory measure before battening down the hatches and firing up the computer.

In the gloom, my eye fell on four eight foot stair rods that I had found in an outhouse at my Aunt Pickles’ house, fifteen years ago. I was sure that they would come in handy some day.

We now have a sturdy 12′ x 6′ walk in fruit cage. Harrod Horticulture eat your heart out.