The Cheveley Two. Growing butternut squash in a barrel 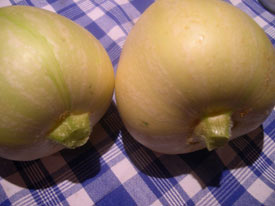 This year I grew a butternut squash in a barrel on our gravel drive. It’s southwest facing and gets sun all afternoon when the sun makes an appearance. It was my first journey into the world of squash growing.

This meant several tense moments reversing at speed as a passenger in Danny’s car. Finally I announced.
“If the wheels of your car touch even a leaf of that plant I’ll..”
The reversing operation was carolled into a ten foot spurt ending with a gentle roll. He’s cut it fine but rubber tyres never touched squash stems all summer.

I reckoned that butternut squash have a very long shelf life so would be a great vegetable to grow in a household where “Let’s bung it in the freezer” is the answer to most gluts and lucky discoveries.

If we could grow them, they could sit in our larder for months. And they probably will as the fun was more in growing them rather than the prospect of eating these chubby specimens. The barrel was filled with chicken poo and homemade compost. The squash loved the combination. Twining and sprouting like a plant possessed. These two fruits have been growing for weeks, nurtured with cans of water and weekly feeds.

Tonight I reached for our kitchen machete and harvested the pair. There are still several mini squashes developing on its tendrily stems. All we need is a week of warm sunny days for them to really take off. I reckon that these fully grown ones were diverting all resources and the teeny squash needed a break.

Until now I’ve just flirted with squash. Like marrow and courgettes, they have never been at the top of my shopping list. I’ve enjoyed them in the past, simmered and sprinkled with pepper and served with a knob of butter. They are also great for soup and enhance endless dishes. Last year we made marrow rum how about squash rum?

“They are a great thing to grow.” I explained to D. “Even if it just makes me feel good seeing them increasing in size. And we’re going to eat them. I promise that I’ll tell you, after the event.”

Even D has become fond of the Cheveley Two.