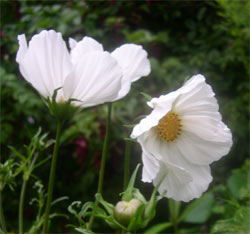 This morning I rose early to start a new decorating contract in Cambridge. Danny had wondered why I was cooking rice last night.
“It’s for rice and cottage cheese salads. You can bung in all sorts of delicious things. Perfect when I’m away for the day.”
“Can I have some too?”
So I’d made him lunch, filled a thermos, sorted out the batteries for my radio and dealt with the dogs and poultry.

With seconds to spare, I fastened my seatbelt and turned Jalopy’s ignition key. There was a feint gasp and then silence.

Jalopy is the only member of our family that has had a long summer holiday this year. Six weeks lounging on the drive, washed by the rain and every now and then warmed by the sun. I’ve been working just across the road whilst she enjoyed a well deserved rest.

Danny sprang from the Rat Room and did the magic with the jump leads. Jalopy was talking again and we chugged out of the village towards Cambridge. I glanced at the petrol gauge and noticed that it was below zero. Turning the car, I lifted my iron clad boot from the accelerator pedal and the engine died. Thank goodness for mobile phones.

“Danny, we are at a standstill. Can you come with the jump leads? We might need the lawnmower petrol, it’s in John’s shed.”

Perhaps D had sampled the rice dish as he was all smiles as he quickly raised the car bonnets and clipped on the red and black jump leads. I topped up the petrol, using the curled cover of a paint chart as a funnel. Jalopy coughed into action and we were away on a wave of smiles.
“If she breaks down again, I can’t come for at least half an hour as I’m on a conference call in five minutes.” Danny mouthed over the roar of the engine.

Jalopy and I came to a grinding halt a mile later. I decided to walk the five miles home to find the client’s number, explain the situation, buy a new battery for Jalopy and possibly take the rest of the day off. I’d had enough.

After striding briskly for five minutes in the rain I began to regret my decision. This clearly wouldn’t be a 30 minute jaunt. Somewhere in my memory bank I retrieved the fact that an average man walks at 3 miles an hour. 5 miles would mean 1.6 hours for the average man. A small stressed painter and decorator might take considerably more time.

Suddenly, on the horizon I saw a grey car. Could it be D’s car – coming to rescue me? As the car got closer it clearly wasn’t his. I noticed that the couple were smiling as the car slowed down, in a ‘we need directions’ sort of way.

“Have you broken down?” The couple were in their sixties.
I was instantly suspicious; Jalopy was parked in the opposite direction so how could they know?

“We passed the old Volvo, and then you and when we reached the top of the hill realised that you may have broken down.”
I was astonished by the Miss Marples logic. She added,
“From the paint on your clothes, you must be a decorator.”
I nodded.
“And there were paint pots in the car. Would you like a lift? This is the middle of nowhere!”
I could have hugged them both. Within seconds I was sliding into the back seat. As I pulled the door closed and we turned for the village I remembered my mum’s rule,
“Never get into a car with strangers.”

Only a deranged couple would want to abduct me for the white slave trade.
They dropped me at the cottage gate. True Samaritans. I was amazed at their generosity and so grateful.

The new battery did the trick. As D held his breath, I turned the key and Jalopy came alive with a reassuring purr. We reached Cambridge at noon thanks to The Good Samaritans, D and trusty old Jalopy who probably only wanted to extend her holiday for just another day.