The old English legend of the Devil and the blackberries 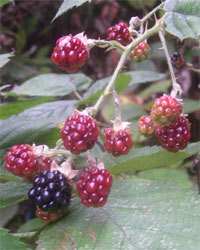 “Don’t pick blackberries after October 11 as the Devil gets in them.”
Mrs Houlton eyed my basket as she stirred her tea. Way back then I’d blackberry for my mum. She liked them scattered in a crumble or a handful tossed into apple compote. They were a great little present before I returned to University.

“What exactly do you mean?” I was intrigued.
“Well it’s an old English tale, really. The saying is that the Devil was kicked out of heaven on October 11th. He landed on a blackberry bush. It must have hurt as each year he takes his revenge by spoiling blackberries after the 11th. Some say he spits on them, others that he pees on them.”
She gave me a sharp, clear eyed look.
“What ever he does to them, you’ll find that they taste thin after this date.”

Mrs Houlton was a wise old soul and I blindly followed her advice. She helped my mother in the house. Small and energetic she was intelligent and kind. We eventually moved away and a few years later her daughter drove her up to see us in Oxford. As the car drew away Mrs Houlton filled the back window of the car, smiling and waving goodbye. I sensed that I wouldn’t see her again. She died a few weeks later.

Thinking about it now, October 11th is a pretty good point to stop picking blackberries. They are best picked at the end of a warm sunny day. Often we have had the first touch of frost in the UK by this date and a frosted blackberry has a watery taste. Although the weather forecast for the rest of the week looks mild I am going to take a small break each day to harvest the second flush of blackberries in the garden and remember an old friend.