The Syringa Summerhouse and flowers from the garden June 2008 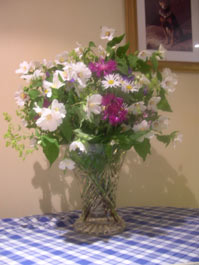 My mum pruned her Philadelphus on Sunday and had saved a large bunch of flowering branches for me.

The Philadelphus (Mock Orange) has a special meaning for mum. When she was a child she played in a Philadelphus summer house in her parents’ garden. She always calls it the Syringa Summerhouse. In those days Syringa was a name for Philadelphus and didn’t refer to lilac as it does now.

“The grown ups weren’t interested in it at all so I thought of it as mine.”

I’d always imagined this summerhouse at the end of a path, a bit off the beaten track. With a decent bench inside. The perfect place for a secret tryst.

I’ve since discovered that it was in a border. It was a three sided summerhouse with an open front, roof and a simple backless bench. But the key thing is that my mum can remember how it was constructed. Several shrubs had been trained over bamboo canes.

“It looked tatty in winter just a lot of twigs and sticks. But in early summer it was wonderful, with the scent of the flowers and when they faded it was still lovely sitting there with the dappled light shining through the leaves.”

Over the years I have planned to make a similar summer house but somehow never make a start. Suddenly, on Sunday I was carrying my future summerhouse in my arms. I plan to take cuttings from my mum’s Philadelphus bouquet.

Hopefully it won’t be long before we both can sit in the dappled light and let the scent waft over us, just as she did all those years ago.