Growing tomatoes in the greenhouse. Tips from traditional practice at Audley End House

Photo: May; tomatoes in my greenhouse

This year we are going all out for rearing tomatoes. Growing them on the sunny wall in front of the cottage and in the greenhouse. We are nurturing fifty plants and if all goes well we’d love to be able to bottle some fruit for use during the winter months. Danny is a tomato as well as a potato fan – well they are related after all. He loves to graze on the toms when I’m out at work. If I grow loads he is almost able to steal with impunity.

Unfortunately tomato blight has attacked the crop the past two summers but hopefully we will have better luck this year.

At the beginning of August 2008 I spent a really happy day with Magic Cochin who writes the superb blog Purple Podded Peas.  It was an Interblog day out at Audley End House. I fell in love with the large walled kitchen garden, greenhouses, potting sheds and stores. The under gardener’s bedrooms backed onto the immense boiler that heated the greenhouses. Which seems a good balance, staff and delicate fruit all being warmed by the same furnace.

I was impressed by the system that they used to support the cordons in the tomato greenhouses. String was attached below the bottom two leaves of each plant and then twisted gently round the stem.  The top of this string was attached to lines on the sloping glass roof of the greenhouse. There needs to be a fair amount of play on this string so they had evolved an ingenious plan to allow for growth of each cordon – height and stem. This was a small piece of wood with a v shaped cut at each end. This piece of wood held the slack, secured by a knot in a groove. As each cordon grew the slack could be gradually released. 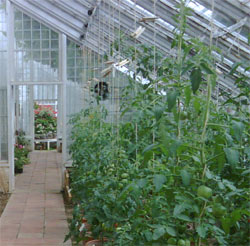 Magic Cochin encouraged me to photograph this greenhouse so that I could replicate the system. In fact she’d used the same method in her greenhouse. It was lucky that I did as today, when rain stopped play at work, I was able to study the system at Audley End from my own kitchen table. I also spotted that the tomato pots were just standing on gravel, without saucers! I had been wondering where I could find the suacers that I needed.

I looked out my slim greenhouse gardening bible The Royal Horticultural Society book Growing Under Glass by Kenneth A Beckett. This book confirmed that tomatoes don’t like to stand in water (one of the drawbacks of grow bags). This book also pointed out that often they needed watering three times a day in hot weather. This is where the reservoir system could come in very handy. And cut watering to just twice a day. 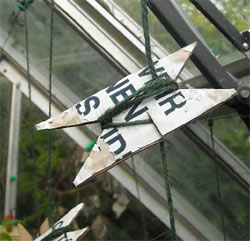 The supports to hold the slack were easy to make out of an old cardboard wine box. Cutting a v section out of each end and snipping a section on one side to hold the string (easier than struggling with knots). The string is attached just below the bottom two leaves of a cordon – using a reef knot (Left over right and right over left – this will not slip and tighten around the stem of the plant). Allow a decent extra length of string to accommodate the growth of the stem. The string is then gently wrapped around the stem of the plant and secured to a wire about 5-6 feet above the plant. Use a cardboard support to take up the slack on the string. This can be gradually released as the tomato cordons grow and strengthen. Just keep on winding the string gently around the stems until you stop the plants. We do this when they have five good flowering trusses.

Although setting this up was a bit of a palaver I can already see the benefits. It’s easy to spot the leaves that need to be removed to keep the cordon shape. Also all the plants are getting a decent share of sunshine and light.

I also removed the netting that I hang in the summer greenhouse. According to Growing Under Glass, the use of netting is generally to keep the temperature down in the greenhouse. If you don’t grow a lot of shade loving plants, your light loving plants will thrive without netting and not get quite so leggy. Our greenhouse is in a moderately sunny spot with windows that open automatically when the temperature goes up. I always leave the door open too on warm days. So the net has been washed and it now hanging on the line.

We are going to try a similar system with the tomatoes that we grow along the front of the cottage – far easier than the unwieldy canes that we’ve used to date. A couple of sturdy supports with a strong wire slung across to support the strings would be perfect.

It will also be easier to keep a beady eye on the precious trusses as well. Danny beware.