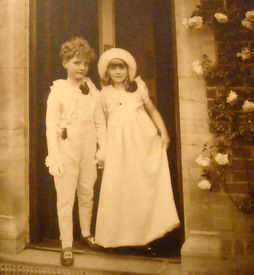 My father dressed as a page boy with an unknown bridesmaid

Do you remember these words?

“Fred Jesson: You’ve been a long way away.
Laura Jesson: Yes.
Fred Jesson: Thank you for coming back to me.”
Brief Encounter 1945

Yes, I’ve been a long way away. Not in the arms of Trevor Howard. And Danny was actually quite happy about my circuitous journey.

I’ve been researching some of my family history. Particularly my Scots grandmother, Jean Fletcher Taylor. I know very little about her except that she was beautiful in her prime and managed to hook a rich husband and marry him at the age of 34. In 1914 that was a real coup, as generally ladies got married much younger in those days.

Her family were from relatively humble origins. Her father and mother worked together as seedsmen and eventually market gardeners. Their daughter, Jean was their only child. Imagine their delight when she hooked the attention of a wealthy army officer. His parents were no so happy about this liaison and instructed the commander of their son’s battalion to transfer him Egypt.

My great grandmother and Jean were not to be pushed aside. They took a boat to Egypt and the romance flourished.

Unfortunately Jean’s husband was killed in1918 – during the WW1. They had no children. She married my grandfather, Jim in 1920. Jim’s first wife had died in childbirth. My aunt Pickles was their one surviving child. My father was born in 1921 and was a surprise!

Unfortunately my grandmother Jean fell under the spell of Ivor Kreuger’s Match King Scam – the shares are doing so well, why not buy more?  When they crashed she lost a lot of her fortune. My father could remember her announcing the news as he watched my grandfather being shaved. He didn’t understand the amounts of money involved but the tremor that went through the room indicated disaster.

Tracing ancestors is fun and I’ve found it totally absorbing. It’s like a vast game of pelmanism, searching, looking, noting and then suddenly things begin to pair up. Which line shall I continue with? Is the initial on the marriage list misheard – could it be D or T rather than C? What happened to the children that they were suppose to have had, were they adopted?

On a good American ancestry site – http://www.familylink.com – I found a report of my Grandmother Jean’s wedding in the Daily Mail. This was alongside some wonderful advertisements and some marvellous articles which included, why women should not be trusted with cheque books and a steamy murder trial.

Generally I’ve been searching through lists with the minimum necessary information and this somehow crudely highlighted how short our lives are. On the other hand, piecing together all these tiny scraps of information suddenly makes distant ancestors suddenly come alive. I’m hooked!