Update on Mrs Boss and the ducklings: one glorious month old 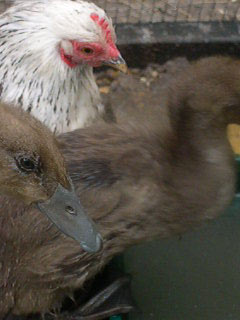 The ducklings are thriving. You haven’t heard much about them as there seems to be little to report. But writing this post this evening there seems to be loads. And I havn’t even touched on Carol bursting into the Emerald Castle to steal their greens!

The ducklings are tall now, towering over Mrs Boss – the small, squat bantam that is their adoptive mum. Tiny feathers are appearing on their wings and tails and they are still covered with the softest down.

One duckling has started to quack. A fuzzy sort of sound, reminiscent of Sweep’s voice (do you remember those glove puppets Sooty and Sweep? I have to admit that they never were a favourite but Sweep’s voice fascinated me. How could a dog ever sound like that?). When I first heard the burr eminating from the Emerald Castle grounds, I assumed that it was Mrs Boss as she has a wide range of expressive utterances. But it turned out to be Tipex. Freddie and Eric are still cheeping.

Apparently female ducklings quack first. Just as it should be.

Our ducklings are the ultimate loungers. In the morning they like to indulge in a spot of sunbathing. The afternoon sees them repairing to the shade of the Emerald Castle as Mrs Boss stands in a lonely, solitary vigil in the castle grounds.

If she hears me approaching she calls them and they tumble out, blinking in the sunshine. They are partial to snacks between meals, chopped greens and vegetables and some Fortnum and Mason priced duck treats that I cast on the water of their seed tray pond.

I’ve discovered that clean water ideally needs to be supplied with food. The food is washed in the water, the water is drunk through the food. Clearly Mrs Boss hasn’t taught them this – being a well bred bantam who eats and then drinks. This must be an instinct harping back to ancient times when the first webbed foot of an ancient duck ancestor was finally placed on dry land.

They do have a 24 hour buffet of chick crumbs to sustain them but there’s nothing like the offer of worms, slugs or handful of chopped lettuce to keep them on their toes. Then it’s off the sunloungers in an instant and no holding back.

The slothful waddle is transformed to an energetic dash to grab as much as possible in the shortest time. Like the Olympics, shaving seconds suddenly counts. It’s the difference between retrieving the slug or missing out on anything – even a medal. For a few whirling minutes the ducklings appear to be as cunning as a conman on a charity marathon. They jump on their sibling’s feet, easy as they are so big, bump and shove and employ every tactic to get each other to drop the treat. So the swishing of food in water, guzzling, barging and thieving is sustained at a frenetic watersplashed rate until the very last gulp. Mrs Boss observes in the backround and always gets some treats herself. 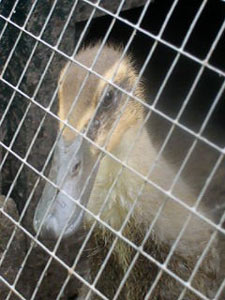 Then the ducklings stand looking out. Hoping for more. And Mrs Boss bobs about in the background happy to be part of the gang. If she finds an extra undiscvered morsel she often squeaks and clucks and all three dive in as one to retrieve it.

Sometimes at dusk I open the side of the caste to peep in. A contented Mrs Boss looks up. Surrounded by a half circle of adopted ducklings, pressed to her side, their beaks nuzzled into her feathers for warmth and comfort.