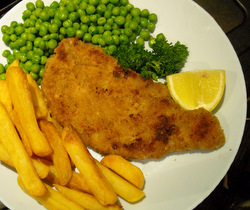 “How about Wiener Schnitzel for supper tonight?”
Danny looked unimpressed.

Picking through the freezer I had found some small veal escalopes that I’d picked up from the Tesco *CFC a few weeks ago. One was a little smaller than my hand and the other barely reached across my palm. Wiener Schnitzel seemed the sensible option. I had never made schnitzels and was keen to have a go.

Danny perked up when I mentioned that I was going to marinade the meat.
“Great idea. Veal can be so tasteless.”
Between you and me I like the subtle flavour of veal and the blandness of traditional Wiener Schnitzel but I was keen to switch D onto the delights of schnitzels. In the end I was delighted that I took this route.

So the veal marinated in the fridge all day and during my breaks I sniffed about the Internet for recipes. I discovered that all sorts of meat are used for making schnitzels from pork to chicken – it’s a great way of stretching meat (literally) to go a bit further. I watched a video of a man making 20 chicken schnitzels from two chicken breasts and my mind raced – if my schnitzels worked this could be a whole new way of eating less meat and still feeling satisfied.

These schnitzels were delicious. The key was the marinade – the veal was packed with flavour. And they were quick and easy to make too.
Veal Schnitzels (Wiener Schnitzel) for two

Prepare the marinade and add the veal (I use a small plastic bag wrapped tight around the meat so that the marinade is in contact with all surfaces) and put in the fridge for 5-6 hours.

Drain off the marinade and place each escalope between 2 sheets of cling film. This is the fun bit – bash the escalopes gently with a wooden hammer or rolling pin to a uniform thickness (of about  a quarter of an inch/ 6 millimetres).

Take three plates. Spread out the flour on the first plate, the beaten egg on the second and the breadcrumbs on the third.

Coat each schnitzel with flour, and then dip each side in the egg and finally the breadcrumbs.

Fry the schnitzels for three minutes each side. Let them rest in a warm place for five minutes and serve with a wedge of lemon.