Navigation Menu
Home » Discoveries » We have got a Solar Tunnel polytunnel!

We have got a Solar Tunnel polytunnel! 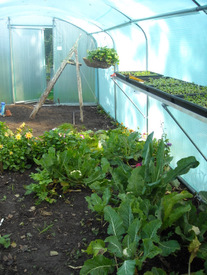 It’s all Lynn Keddie’s and Jackie’s fault. They both set the “why not get a polytunnel” seed in my brain.

Like everyone else we are becoming very concerned about the rising price of food. It just seems to be creeping up and up. If we invested in a polytunnel we could extend the growing season even further and might be able to become 95% self sufficient in vegetables and a lot of fruit. That is with the help of the freezer, the dehydrator and plain old fashioned bottled fruit and tomatoes. The fledgling flower selling business would benefit too.

I did loads of online research, got in a complete muddle and invested in The Polytunnel Handbook by Andy Mckee and Mark Gatter which explained mysteries such as ground plates and crop bars. This is an excellent introduction to polytunnels and a good investment if you are considering buying one and want to avoid expensive mistakes.

I spent hours building my virtual polytunnel at various polytunnel sites. In fact I think that I was suffering from a bit of polytunnel madness for a while.

We considered buying one of those cheap and cheerful polytunnels but after a lot of thought we decided to go for a tunnel that would give us years of service. Ideally with straight sides to give optimum growing space. A strong metal structure and cover was essential. I didn’t want the faff or the expense of replacing covers every 4 years. I was keen to extend the growing season for as long as possible.

That is when I discovered Solar Tunnels. I kept on returning to this site as these tunnels ticked every box for me. Two people can erect it over a weekend. You can even add extra modules to an existing tunnel if you need more space. And if you move house you can take it with you.

There is a widespread myth that the Solar Tunnel is three times the price of an average polytunnel. So when I lifted the phone to speak to Andrew at Solar Tunnels I was expecting a pretty high price tag. What joy to discover that I was wrong. Once you’ve added all the ‘essential’ components, such as doors – the price of a basic polytunnel leaps up at an alarming rate. The Solar Tunnel suddenly was within our reach. Andrew does consider discounts for deserving causes and we did get a good deal on ours.

Our Solar Tunnel is 10’ x 20’ (3 x 6 metres) and was built over existing borders – hence the dahlias and cauliflowers in the photo.  It’s attractive and sturdy. Yesterday afternoon I was working in there as the rain beat down outside. Inside it was warm and snug even with the doors wide open. I’m delighted with it and look forward to many happy years of Solar Tunnel pottering and growing.