Posted by Fiona Nevile in Save Money, Vegetables | 11 comments 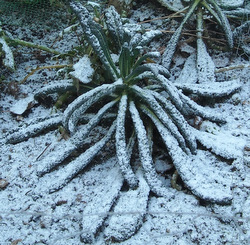 For years I was not very keen on eating vegetables. Danny adores them but I was generally unimpressed. Until I started growing our own. Home grown organic vegetables have far more flavour than shop bought ones as they are ultra fresh. Vegetables that I’ve avoided for years – such as cabbage and Brussels sprouts – have become firm favourites as they taste completely different straight from the garden. And we are saving money too.

I had a longing for ultra fresh vegetables last night so I pulled on my snow boots and grabbed a large basket. I picked Brussels sprouts, calebrese and shook off the snow to gather a few handfuls of the Black Tuscany kale  – I left the bigger older leaves to support the plants and harvested the medium sized leaves.

You were all right – this type of kale needs to be frosted!

It was delicious – sweet and tasty and the slight bobbly texture after cooking was great too. I was delighted as we have quite a lot of it growing in the garden. Even better we have seeds from last year to plant (Danny banned this from the seed list this year – now he’s insisting that it’s included). This kale is so decorative that I’m planning to interplant some in our herbaceous borders – as they do in Italy.

Kale is packed with vitamins and is considered a super food. If you have the space it is well worth considering as it tastes nothing like the kale available in the shops. You can grow it as a baby salad leaf but I must admit we didn’t like it in a salad as it dominated all the other flavours. Perhaps I was a little heavy handed with it?

The frosted sprouts were good too and needed a much shorter cooking time (3-4 minutes). The snow hadn’t spoilt the calabrese – this has been well worth growing too with a succession of florets from August to date. Today I’m going to investigate the cabbages – all under a thick layer of snow. Fingers crossed that they will be OK too.

We scoffed the veg with steak and kidney pie filling, mashed potatoes and mushrooms braised in red wine. Yummy.