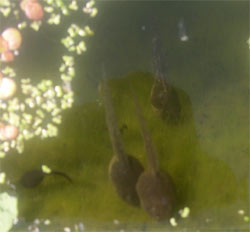 I’ve had a thing about frogs for years. At university I was actually called Frog. I like to think that this referred to my fondness for this amphibian rather than a similarity in legs, feet or grin.

When I moved into the cottage, my mum raised frogs and toads in aquaria in the kitchen. The pond was well stocked with koi in those days and few amphibians visited.

Each August we released the frogs into the garden. Tiny, precious creatures that would disappear into the undergrowth or swim courageously in the pond with perfect breast stroke. Eventually enough survived to return each year for the early spring bacchanal.

This has become a frog event on a par with Glastonbury. Lots of water and love and a festival that lasts for a bit longer than the Somerset one. After a two week window that starts with a few disparate croaks and ends with a love in that knows no bounds, most of the frogs vanish overnight leaving nothing but their spawn. I often wonder where they go. Are they lurking in the cottage garden or have they repaired to nieghbouring gardens? Are there frog gangs that patrol our patch and throw out the revellers?

The heron cleared all fish from the local ponds this winter. I’d occasionally see him in the morning, rising magnificently from our pond with a monstrous wingspan and nerves of steel. Perhaps he knows that it’s illegal to shoot him and his tribe.

Someone at the church fete took me aside this year,
“Although it’s against the law, no one would tell if you got out your gun.”
“But I don’t have a gun.”
The raised eyebrows indicated that he didn’t believe me.

I couldn’t shoot the heron. Even though he has feasted on my fish, he is a superb bird. I am at fault. I knew that he was visiting, landing on the thatch of pond weed, walking into the depths and savouring our stock. Wires around the edge of the pond would not deter this bird. We have to net the pond or at least some of it. We were stretched to the limit last winter with no time to stop a wily bird.

So with fish stocks severely depleted, the trillion tadpoles have the green light this year. I have lain in the warm grass and watched newts swimming with small feet stretched out like stars, eagerly grazing the tadpole shallows. Now that hordes of tadpoles have developed into sizeable beings the newts are nowhere to be seen. These tadpoles hover just below the pond surface and seem to look up with unblinking eyes. When they eventually emerge will they guzzle all the slugs and snails in our garden. Or will our neighbours complain about a plague of frogs and mention guns again?

Later this summer we will restock the pond but for the moment the space has become a haven for wildlife. Birds wash in the shallows and frogs bask under the shrubs that trail in the pond. Water Boatmen skim the surface of the water and bees settle on the pond weed to drink. The dragonflies chase, fuse and make love just above the waterline.