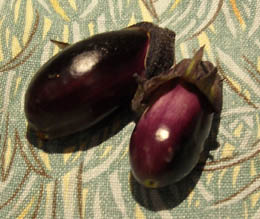 I sprang home last Spring with a pack of Chinese legend aubergines, dreaming of a greenhouse full of aubergine plants laden with succulent fruit. By the end of the summer I had not even seen a flower let alone a peep of an aubergine.

Since then I’ve discovered that the seeds need to be sown really early (by January in a heated greenhouse at the latest). So I didn’t bother this year.

About a month ago I was costing a job in Saffron Walden, for my old pal Anna of onion gravy fame. And I popped into the Springwell Nursery to buy some stakes.  Our brassicas need to be protected from greedy gourmet wood pigeon.

I spotted that they were selling off their vegetable plants for £1.25. Small aubergine plants were weighed down with flowers. Aubergines (the fruit of egg plants) are roughly a pound each in the UK. The plant that I bought plant had eight buds. If all went well I could harvest £8.00 worth of aubergines for a fraction of the cost.

With a little nurturing the plant produced another flush of flowers.
“This is the golden goose of aubergine plants.” Danny smiled.

There was just one thing that worried me. The plant was just over a foot high, how could it produce normal sized aubergines (6-8 inches)?

One glorious day a tiny aubergine appeared. We waited and held our breath for it to grow to a reasonable size. It got fatter and paused. Eventually I touched it and it fell into my hand. Half had rotted under the mob cap of leaves. Finally I twigged that a small plant will produce dinky fruit. So a couple of weeks later I harvested these mini fruit. Barely two inches (five centimetres) long.
When I was photographing them Danny appeared.
“No one will know how small they are.” Danny added helpfully.
“If I explain the history and size they will.”

Now I wish that I’d bought three plants. We’d have enough aubergines to make some of Oded Schwartz’s mini preserved vegetables. Meanwhile I’m scratching my brains for a doll’s sized appetiser recipe for tomorrow. Any suggestions would be very welcome indeed.