Posted by Fiona Nevile in Pheasant and Game | 5 comments 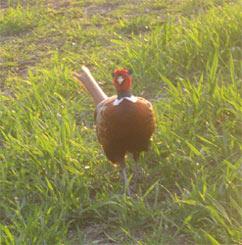 My Mum celebrated her birthday this month. As your parents get older, each birthday is a bit more special than the one before. Racking up the years is an achievement. So we wanted to make the celebration lunch a bit special.

“Why don’t we create a pheasant dish for your mum?”
“She loves Victoria plums and we have some in the freezer. I reckon that they’d work well with pot roast pheasant.”

This is a really easy recipe that tastes as if you have slaved for hours. The sauce has loads of depth and vroom and the pheasant was very tender. Although the sauce only contains the fat from the bird, it tasted rich and one hen pheasant easily fed three people. I had skinned the pheasant that we used so it was vital that the casserole dish was tightly sealed throughout the cooking process. If you are using a pheasant with skin you could brown the bird by frying in a little olive oil before adding it to the plums.

We used our recipe for mini roast potatoes to partner this dish as they can be cooked at a low temperature and the small crispy potatoes are much tastier than game chips. I also discovered that they could be cooked until the crisping stage and set aside in a warm place until the meal was nearly ready. They were then returned to a hot oven ten minutes before the main course was served. They warmed through and crisped up perfectly.