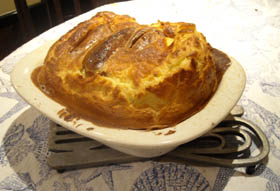 Photo: Toad in the hole

When the weather starts to get chilly I have a longing for a really good Toad-in-the-Hole. Not the rather chewy offering that I munched as a child but a light and puffy one. A dish that would have Danny pleading for more rather than the slightly suspicious response,
“I don’t think that I’ve ever eaten Toad-in-the-Hole.”
Long pause.
“I’d be interested to try it.”

The problem was that I didn’t have a recipe. Then I twigged that our Yorkshire Pudding recipe probably would be good. So I used Delia’s version as a guide for timings and temperatures but I rejected her recipe for the batter as she only used one egg and the secret of our recipe is to use two. I also bought the deluxe Musk’s Newmarket sausage. The result was superb.

This is a great way of making a pack of sausages go much further. If we had made mashed potato as an additional side dish then it would easily feed four. I’m embarrassed to say we scoffed the lot. Billy Bunter

eat your heart out and cry “Yaroo”.

I teamed this up with Anna’s famous onion gravy and peas. Don’t be tempted by Delia’s roasted onion gravy – I tried it last week and it wasn’t a patch on Anna’s.

Ingredients:
400g of best pork sausages
2 tbsp of olive oil
For the batter:
110g of plain white flour
2 medium eggs
300ml of chilled milk (we use semi skimmed)
Large pinch of salt, large pinch of mustard, half a teaspoon of horseradish sauce.
Method:
Switch the oven to 220c (200c fan)
(If you are going to make Anna’s onion gravy start it now as it takes about 45 minutes)
First make the batter.
Sift the plain flour into a bowl. Add the salt and mustard powder. Make a well in the centre and break in the two eggs. Gently whisk the eggs into the flour and gradually add the milk. I actually used my stick blender to do this and it gave a much better result. Ideally, return the mixture to the fridge in a jug for half an hour to chill whilst you brown the sausages.
Put the sausages in an oven proof pan. And bake them in the centre of the oven for 20-30 minutes or until they are gently brown. Remove the sausages to a warm place and add the olive oil to the base of the pan. Return the pan to the oven and whap the heat up to 240c (220c fan) for about ten minutes. Now at this stage time is of the essence. Whisk up your chilled batter, quickly toss your sausages into the hot pan and pour the batter over return to the oven and turn the heat back down to 220c (200c fan) for about 30 -40 minutes until the batter is golden brown. Make sure everyone is sitting down before you take it out of the oven and prepare for astonished applause.