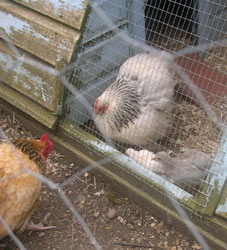 Mrs Boss is the heroine of the Farming Friend’s /Cottage Smallholder Interblog Guinea Fowl Breeding event. She is now starring in her first movie, which opened this morning on YouTube. Click here to view Mrs Boss and her keets, filmed entirely on location in the hen run with a hand held camera.

The keets are starting to make tiny test flights in the handkerchief garden. The fact that they can fly so young has been a worry. When I opened the side of the castle to check their feed and change their water would they fly out? The netting in the main run is large and they could easily get through that straight into the jaws of the Min Pins who are keenly interested in all things tasty and feathered.

Mrs Boss’s castle is well designed with a small portcullis that can be raised and lowered from the outside. It is dropped when the keets have settled for the night, a bit of extra protection from draughts and vermin.

When the portcullis is raised in the morning they beetle out in the hope of finding something tasty, such as lettuce or chickweed in their run. As they fluttered about the handkerchief garden this morning I quickly lowered the portcullis, trapping them outside. They didn’t like this and marched up the ramp and tapped on the portcullis with tiny beaks. This continued on and off until I had cleaned the castle and given them a large mattress of fresh hay. I raised the portcullis and watched them through a crack in the castle wall. They shot in and bounced in the hay with little shrieks.

The keets are now much more interested in the world outside the confines of the castle and spend a lot of time looking out. The hens in the big run are interested in the inhabitants of the castle too. Mrs Boss’ enemy puffed up her neck feathers and made short small dashes towards the wire. Mrs Boss muscled up on her side and stood her ground. The keets watched this drama with interest.

They are noisy busy chicks, leaping for cover under Mrs Boss’ wings when it rains. Their teeny heads popping out every few seconds to check if it is still raining. They are a total distraction it is hard not to stand and watch them for hours.