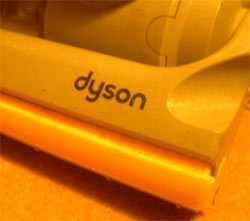 A couple of weeks ago our trusty old Dyson cut out. It felt very hot so we let it rest for a couple of hours while I searched the Internet for a replacement vacuum cleaner. I’m lucky as I visit new houses every week and have road tested hundreds.

When Danny tried the Dyson again it purred into life and continued for a good half hour before it coughed briefly and filled the room with acrid smoke.

I had a brainwave. Why not try and find a replacement on Freecycle? The worldwide recycling scheme where people offer unwanted goods to others. I joined a couple of groups and discovered that there were two vacuum cleaners up for grabs. I quickly emailed the owners and waited for a response. A kind lady did get back to me a few days later but by then I had the repairing bit well between my teeth.

I toured the DIY repair sites on the Internet and discovered that someone in Australia had replaced the motor on their Dyson, with step by step instructions. I was pretty sure that I needed to replace the motor. So I rang Dyson and explained the problem. The friendly man on the line explained that I needed a motor and a filter. These came to around £47.00. Then he told me about the Dyson servicing scheme. For £65.00 (including VAT) an engineer would call, service the machine and replace any parts (except the accessories).
“It’s possible that you need other parts so this could be a good option for you.”

And it was. The engineer called and disassembled the cleaner in seconds. He went out to the van and bought back a large sack filled with the relevant spare parts. As for as I could see this was most of the moving parts – I’ve just had a quick look at the Dyson spare parts list and ours totalled just under £112.00. All guaranteed for a year of carefree vacuuming.

Due to certain laziness on my part regarding washing the filters, our Dyson had been a rather faded dust nibbling assistant for years. Now it was transformed into a dust chomping animal with a roar that had Danny rushing downstairs to marvel at the beast.

Hats off to Dyson.