Examine your tools carefully before you proceed 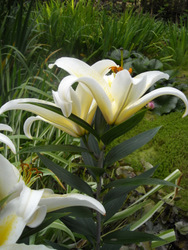 Photo: Lilies by the pond

Years ago Seraphina and I visited Hampton Court. A day trip – as we were living in London at the time. We decided to hire a traditional rowing boat and swish up and down the river. Being a wooden toymaker at the time I had the strongest arms so was assigned to the rowing.

We climbed gingerly into the boat and I took the oars. It was incredibly hard work. We got a lot of strange looks which we struggled to understand. It was only when I was turning the boat at the debarkation point – doing a sort of nautical three point turn – that I realised the reason for the goggle eyed stares. Suddenly the boat shot forward. I had been rowing back to front, with the straight end rather than the pointy end of the boat, pushing through the water.

How could I have been so stupid? Easy. I just didn’t take the time to think it through.

Yesterday I was removing a lot of old, unwanted forsythia stumps from the new border in the front garden. A job that I’d been putting off for weeks. A pick axe is a marvellous tool for accomplishing this task – once you have got to grips with getting the correct and confident swing.

After a while I noticed that the pick axe was not performing consistently well and put it down to the inconsistency of my ‘girly’ swing. Then tottering indoors for a break I propped the pick axe against the fence and noticed that it had a stubby end and a sharp end.

Progress was much quicker from that point.