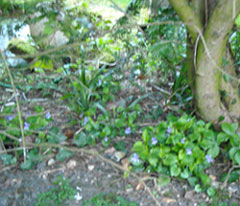 I concentrated on the herbaceous borders all weekend and stayed outside this evening until I couldn’t distinguish weeds from plants. Quite a few plants had been knocked out by the hard winter, which is always sad.

As usual giant buttercups, dandelions and nettles are thriving. But at this stage in the year they are easy to remove. I moved in to the cottage seventeen years ago this April. Easter was early and my mother and I spent the long weekend weeding the existing beds. They were packed with buttercups that were so hard to remove that in the end we tackled them with knives.

Early this evening I noticed something that I didn’t know was flourishing in the garden. At the bottom of the yew hedge beside the pond garden I discovered three little mounds of violets, which I’m sure that I didn’t plant. They were certainly not there when I set the hedge.

I love violets but have not had much success with them. Clearly they love a dry and shady spot. I don’t know how these violets got into the garden but I was thrilled to find them.

However much you try and control a garden there is always an almost magical element of surprise. The birds and wind spread seeds. Last year I noticed that some thoughtful mice had buried wild cherry plum kernels and we now have a few saplings beside the compost heap.