Navigation Menu
Home » Chickens » How many eggs does a chicken lay each week?

How many eggs does a chicken lay each week? 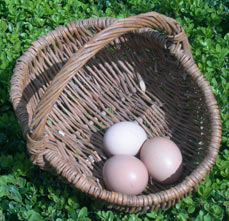 “How come there were only four eggs in the basket this morning?'”
Danny asked when he brought in my breakfast tray.
Admittedly I had given John Coe four when he came to mow the lawn this week, but only eight in a week! Danny was concerned, “What are we going to do about our fry ups?”

Danny’s mother kept chickens when he was a child and as a Poultry Instructor, passed on her knowledge. Despite this both of us were a bit naive when it came to keeping chickens ourselves. Just before we collected our chickens three years ago, I bought a pretty little basket in a sale in Newmarket. We planned to buy six hens and I assumed that I’d collect six eggs a day. That basket gathered dust whilst we waited for the first egg.

We bought hens on ‘point of lay’ and threw a party to celebrate their arrival. The guests peered through the gloom at the hens and discussed how to deal with an egg glut. After the party we decided to ask our chicken feed supplier for advice. As we had zero eggs, we must be doing something wrong.

‘Try these,’ he said, producing a box of china eggs with a flourish. ˜The hens will take a peek at them and it will give them the idea.’ I hurried home, opened the nesting box and made plump tempting nests of sweet smelling hay to hold the china eggs.

The chickens seemed happy enough. I observed them having dust baths, sunbathing on the warm roof of their ‘day centre’ and running for a handful of grain in the afternoon. Every day I peeped into the immaculate but egg-free nesting box and trudged back to the house, disappointed. Summer turned to Autumn and then to Winter. ‘Hens go off lay in the Winter, so don’t expect any eggs until the Spring,’ a kind friend advised. I could have hit her.

We were away over New Year and when we got back, there were only five chickens in the pen. I opened the hen house door and there was the sixth hen, absorbed in her task. She barely noticed me as she was clearly straining. I rushed back to the house to tell Danny the breaking news. We crept down to the hen house an hour later and saw our first egg lying resplendent in a clutch of white china fakes.