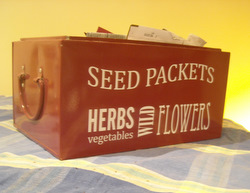 Finally I’ve completed ordering my seeds. Mostly from The Real Seed Company and Lunar Organics – who stock biodynamic organic seeds from Stormy Hall Biodynmic Farm. The vegetables varieties that I couldn’t find on these two sites I’ve ordered from my favourite traditional seed supplier Thompson and Morgan. If you do go down the Thompson and Morgan route it’s worth remembering that they give a 10% discount code for your next order with confirmation of your order. So it’s worth buying a small amount and then using the discount code for the rest of your order. Unfortunately I didn’t think to do this.

I questioned Danny closely about anything that he’d like me to grow.
“Brussels Sprouts, cauliflowers, beans, peas and some swede would be good. Well anything except kale.”
I haven’t got round to cooking the frosted kale yet.

So this is what we’ll be growing this year for home consumption and to sell on the gate side stand. I’m going to be selling baby plantlets right through to harvested vegetables, herbs and living lettuces.

From The Real Seed Company

Quick Heading Calabrese this forms heads in 60-80 days
Green Heading Calabrese crops in 120 days
Early Purple Sprouting broccoli which will be ready early march 2011
Cima di Rapa San Marzano – popular on the Continent can be harvested in 40 days
Kailaan stem broccoli – this is new to me and the stem is supposed to be really succulent – can be harvested from 20-70 days
Verde Pueblo tomatillo – for the greenhouse to make into salsas for the gate side stand
Giant Guatemalan Groundcherry – a new fruit for sauces and the gate side stand
Kaibi round sweet pepper – greenhouse
Untranslatable sweet pepper – greenhouse
Cherokee Trail of Tears Bean – this is the one pack of seeds that drew my attention to this site
Cupidon Bean – a green dwarf French bean for salads, cooking, dehydrating and selling plants and beans on the stand
Minidor Bean – a yellow dwarf French bean for salads, cooking, dehydrating and selling plants and beans on the stand
Seven Hills Brussels Sprout – short and compact so less likely to blow
Ottobrino Romanesco Cauliflower – these are just so pretty
Precoce de Louviers Cabbage – harvesting from August into the Autumn
Rouge Tete Noir Cabbage – late summer/early autumn red cabbage
Asturian Tree Cabbage – Spanish heirloom variety – grows like kale, harvested like kale, tastes like cabbage
Summer Crookneck squash – it’s tasty and a fun shape
Tamra Cucumber – I’ll be growing some in the greenhouse and some outside
Fat Baby Achocha – tasty and prolific
Parisian Pickling or Salad Cucumber – to be pickled for the stand
Frise Parsley – apparently this germinates easily and self seeds well. For home consumption and the stand
Finissimo small leaved basil – we love this particular variety also for the stand
Leaf Selection Coriander/cilantro – home consumption and the stand
Red Perilla – a herb with a sweet fruity flavour – home consumption and the stand
Champion Red Top Swede – Danny loves swede
Liscari aka Salsola Soda – new to me but sounds great. Crispy, crunchy slightly salty – eaten raw or cooked
Magenta Magic Orach/German mountain spinach – another new to me veg – leaves can be eaten raw or cooked
Green and Gold Orach – these will look good with the magenta Orach in a salad or stir fry
Land Cress – a really useful leaf in the kitchen garden
Sutherland Kale – thank you Paul for recommending this. It has some great reviews on the site!
Long Lisse de Meaux Carrot – apparently these store very well overwinter
Jaune Obtuse de Doubs Yellow Carrot – not so susceptible to carrot fly
Millefleur Tomato – home consumption and the stand
Alberto’s Locoto/the tree chilli with black seeds – to add a little spice next winter
Autumn Giant Cauliflower – we’ll do two sowings of this. One in early Spring for August harvest and one in late Spring for Winter harvest.

From Lunar Organics. These are all biodynamic seeds
Beetroot Bolthardy – dehydrated these make great crisps/chips
Brussels sprouts Groninger – slightly earlier harvest
Late Purple sprouting broccoli – to increase the harvesting period for another month
Savoy cabbage Westlandse Putjes – harvested Autumn – Mid winter
Butternut squash Waltham – a friend grew this on canes this year with spectacular results
Peas Hurst Green Shaft – an early pea that can be dried or frozen
Mangetout peas Sugar Dwarf Sweet Green – can’t have enough of these!
Sweetcorn True Gold – my sweet corn has been a disaster for the past two years so hopefully these will thrive
Leeks Winter Husky – thrive in Winter
Parsnip White Gem – again thinking of next winter
Swiss Chard Five Colours – attractive and tasty
Cos lettuce Little Gem – my favourite lettuce
Lettuce Red Salad Bowl – a few leave can be picked at a time
Winter Purslane – to be sown in August and September for winter salad leaves
Parsley – flat leafed – for the stand and home consumption
Tomatoes for home and stand (as plants and fruit)
Gardener’s Delight
Red Brandy Wine -an American variety that Tamar recommends
Black Cherry

From Thompson and Morgan:
Broccoli : Early White Sprouting White Eye – this is sensational and not available in the shops
Brussels Sprout : Revenge – these can be harvested through to February 2011
Cauliflower Gipsy – I’m starting these a bit late (should have planted the seeds in October. So I’m setting the seed in the greenhouse this month.
Onion : Bunching/Spring : Ishikuro – apparently these are very easy to grow with a long harvesting season. I have never had success with Spring onions so finger’s crossed
Turnip : Oasis – Danny says UK turnips are tasteless perhaps he’ll be proved wrong
Marigold – French : Boy O’ Boy Mixed to be planted on the perimeter of Danny’s potato border to deter eel worms.
Cabbage : Summer : Hispi – these will be planted now under glass.

I’ve also ordered Zinnia and Cosmos  seeds as I want to sell posies of flowers on the stand too. Along with these we’ll be growing mizuna, patty pan squash and courgettes (I still have seed from last year). I have saved the seed from John’s runner bean plants and the seed from the Sweet Peas.

My 2010 challenge is that sales from the gate side stand will cover the cost of the seed.

It’s going to be a busy year!