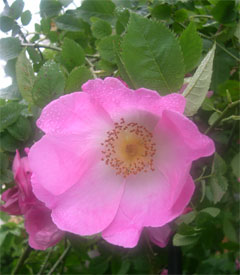 Many years ago I worked in a London Day Centre for mentally ill adults. One day a pretty Maltese lady looked troubled. When I asked her what was wrong she replied,
“I am feeling,” she jutted her chin as she searched for the right word, “. . complex.”

Sometimes I too feel complex and Rosa Complicata is the perfect antidote. This is one of my favourite roses in the garden. I love the name and the simplicity of the flowers. It’s like a child with large clear eyes.

One of my duties at the Day Centre was to organise outings. We often went to the movies or spent a day in a London park. Now I would do things differently. A monthly outing to Kew Gardens would top my list. Even the simplest garden nurtures without intruding. However well planned and tended, there is always that extra magic.

It could be the plant that has self seeded in the perfect place, the birdsong or the dragonflies that have lived through three years of gestation to emerge and delight for just a few fleeting weeks.

I planted Rosa Complicata beside the first of three arches that span a small bricked path linking the pond garden with the orchard area. I had hoped that the rose would forget her ancestral tendency and scramble up the arch.

“Sod that,” said R. Complicata. “I am a large shrub rose that spreads up to four times the span of your regular border shrub rose. This is how I shine.”

R. Complicata was right. She does have an arching habit and clings to this tendency. She pulls away from our arch.

Given her head, she would easily fill the six-foot border between the arch and the pond. She is a large shrub rose rather than a climber but has reached a height of 8 feet, with a spread of 6 feet. Perhaps one day I will clear the border and let her romp away. Meanwhile I tether her to the arch and feel a bit of a pig.

Rosa Complicata is said to have some tolerance to shade and not require a rich and fertile soil. There are overhanging trees on the other side of the arch and the soil is not particularly good in this part of the garden. She has a hard time but every day throughout June and July the clear eyed flowers calm me as I pass by to tend the chickens.

Rosa Complicata is thought to be a Gallica – Rosa canina cross. Gallica roses were enjoyed by the Persians way back in the 12th century B.C. They were fÃªted in France by Napoleon’s Josephine. The large fragrant flowers are followed by big showy hips that cry out to be made into rosehip jelly.