Our hens are laying again 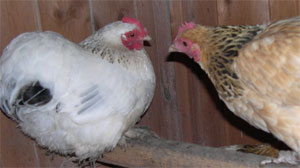 Our hens, being elderly maidensof three years old, stopped laying at the end of October. They started to moult, and when their combs changed gradually from red to pink I knew that egg laying would cease until the days started to get longer.

December 21 is starred on our calendar. Not just the winter solstice but as the shortest day. It heralds the start of the turn around in egg production. Even though we can buy excellent locally produced eggs from John’s shop in the village, Danny has been impatient to have our own.

A couple of weeks ago he was quite animated as he munched his sandwiches at lunchtime.
“I heard a loud cackling from the chicken run this morning. Sounded like an egg being laid.”
They make the traditional egg being laid cackle a lot, even when they are not laying eggs. I have rushed down to find an empty nesting box too many times before. As Danny tends to confine himself to quarters in the winter, he is an innocent on this front.
“You are checking for eggs every day, aren’t you?”
I check each morning, when I go down to scatter some grain and top up the feed and water fountain. It’s always just the giant china eggs in the nesting box. Disappointing but it’s worth making it a routine. When the hens start laying again you know that the eggs are at max, only a day old.

At the moment the chickens are given parrot mix in the mornings. Lots of sunflower seeds and monkey nuts. They love this mixture and start shrieking when I throw open the back door and bumble down to the feed bin with Inca on tow. I toss a handful into the pen and they rush about to get the prime pickings. Inca throws herself at the wire netting and I let myself into their domain. We’re both ignored by the hens, who are totally absorbed with their treat. This was the first morning for weeks when I considered not checking for eggs. I’m clearly not in tune with my hens because when I lifted up the flap on the nesting box, there were two fresh eggs lying in the nest of hay.

I examined the chickens more closely, still pecking away like clockwork. Most of their combs had turned deep red. This indicates that they will all begin laying again soon. I have been so distracted recently that I haven’t been checking their combs. They can change in a couple of days so if you are waiting for eggs take a note of their combs each day.

Unfortunately we will not be given an egg a day from each hen. The hens bred to be layers will produce more eggs than the fluffy bantams. The most any hen, in its prime, will lay is one egg a day. The bantams have never produced more than two or three eggs each a week. Egg production will start slowly from now on. By Easter it should be in full swing until the longest day (June 21). Then it will gradually fizzle out until the days start to lengthen again at the end of Deember.

Egg laying will also be effected by dramatic changes in the weather. A heat wave or a sudden sharp frost will effect egg production adversely. Like us, hens need time to adapt to any sharp change. Whether it be feed, water,weather, new livestock. Ages ago a friend turned down the offer of a new cockrel and explained to me,
“My chickens are just right now. I don’t want to introduce any changes.”
At the time, I thought she was mad. Now I know exactly what she means.

You can, of course, use artificial light to trick your hens into laying. This will shorten the lives of your hens but you will have a good yield of eggs all year round. Many producers destroy their hens at two years old as they have passed their egg laying prime.