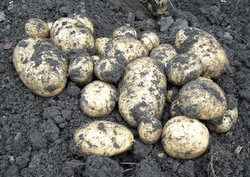 “What do you think of my new bag?”
I could see that Danny was fumbling for a polite response.
“Well it’s ethnic…”
In fact I was modelling a potato bag . Our local garden centre had them on offer 3 for the price of 2 so I snapped them up.

Danny will be growing potatoes again this year. He’s organised to get seed potatoes from a farming friend. But these will be main crop potatoes and I have a yearning to grow some first earlies. I chose Swift – these can be ready to eat in just 7 weeks.  These will be followed a blight resistant strain – Lady Balfour.

Some friends grew spuds in bags last year with great results. A local gardening couple grow theirs in an old dustbin (with holes drilled in the base) and apparently they get loads.

Also these bags mean that I won’t have to sacrifice more border space as they can be set in a sunny spot anywhere in the garden. The bags can be used over and over again. I was delighted with my plans until I checked my email and found that Harrod Horticultural are offering three bags and 15 organic seed potatoes for £13.99  – far less than I had shelled out for 3 bags and 20 seed potatoes. But taking account of the postage they would cost about the same.

I’d bought two mini packs of seed potatoes. Three will go in each bag and I’m going to experiment with the rest using home made containers. There are lots of good suggestions and practical advice for making your own containers here . I also found this useful free growing guide on the Unwin’s site.

Even though I’ve ordered all my seed on line I hadn’t considered buying seed potatoes or bags on the Internet. So I had a bit of a sniff around.

Crocus has three bags on special offer for just £9.99 not including the seed potatoes.

As this is my first venture into growing spuds in containers any advice would be greatly appreciated.