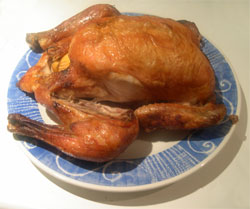 One happy day, Danny opened the small box that holds the Tobasco bottle and pulled out a slip of paper. It was a recipe suggestion for roast chicken baste or a marinade for barbecued chicken. There was just a list of ingredients (no amounts or method). The list intrigued him, it lay beside his place for a couple of days and was studied as he sipped his coffee and tucked into supper. Finally he announced:
“I’m going to try this. Can you get a free range chicken from Fred’s for next Sunday, please.”
Fred Fitzpatrick, (Exning Road, Newmarket) only sells free range chicken and they are always excellent and much cheaper than the supermarkets.

I was a bit suspicious. Cooking from a list of ingredients without a method didn’t seem promising. Although an offer to cook Sunday lunch was not to be sniffed at. I beetled out to the butchers and bought a plump free-range chicken. From this point he was on his own.

I don’t know whether it was beginner’s luck or inborn genius but the chicken he cooked tasted fabulous. Spurred on by this, he has tweaked the ingredient volumes over the years and added his own. He clearly hasn’t heard the slacker’s phrase, “If you don’t want to do it, don’t do it well.” He now has total responsibility for developing recipes for Sunday Lunch and any applause for this section of the blog should be pointed in his direction. Meanwhile I have become a master in the art of mixing a spectacular G&T.

One Christmas Danny cooked roast turkey using this recipe. It was wonderful. Even the best cooks at our table chortled and pestered D for the recipe. Basically the meat tastes similar to a normal roast bird but with an extra subtle vooomph. It’s the automatic gravy that is piquant, intriguing and amazingly good. If you are going to try this with turkey, double the amount of ingredients and cook the turkey for the normal allocated time. We’ve always used Delia as our guide for cooking turkey. The timings are here.

Ingredients to serve 4 to 6:

The measures of ingredients are approximate. Don’t be overly concerned about accuracy.This recipe is for chicken. It works just as well with turkey.The secret is in enclosing the bird in foil to keep it surrounded with moisture during cooking, and to prevent the juices from boiling off. The last 30 minutes, when the foil cover is opened, roasts and browns the skin of the bird nicely.

Ingredients for the gravy base: