Navigation Menu
Home » Fish and Seafood » How to make a deluxe fish pie for less – well worth considering as it’s brain food.

How to make a deluxe fish pie for less – well worth considering as it’s brain food.

Posted by Fiona Nevile in Fish and Seafood | 12 comments 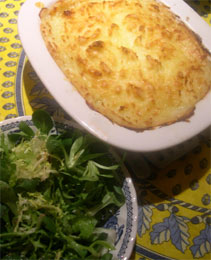 Back in the 1990’s I discovered that I disliked poached salmon. A friend used to stay for the weekend every couple of weeks and she’d bring fresh salmon down as a treat. I made the mistake of enthusing when she produced it the first time. I should have known better – I had eaten a vile dish of curried chick peas for years with another friend. When I originally tasted the chick pea concoction my reaction was a shriek of horror which I attempted to disguise as a sob of delight.

Unfortunately, she was fooled.

Poached salmon also seemed to be a regular lunch party dish in the 1990’s. I forced it down with loads of salt and pepper and libations of wine. A large whisky before supper helped to deal with the fresh salmon experience chez moi.

When Danny discovered that I loathed fresh salmon his face puckered with disappointment. Stubborn to the end, he sometimes bought fresh salmon on offer. It was immediately relegated to the place in the freezer where no man dares to go –  the drawer that always sticks so hard that you have to twist it to take a peek.

Last month, searching for ingredients for our fish pie , I grabbed a fresh pack of the loathed salmon to pad out the other ‘acceptable fish’.

I discovered that even if you have a deep hatred of the texture and taste of poached salmon, it works very well mixed with smoked fish and prawns in a fish pie. Danny was delighted so started to buy salmon from the condemned food counter in earnest.

This evening I made 15 hearty portions of fish pie. Half the fish was salmon, the rest was smoked haddock, coley and prawns. We had been squirreling cut priced, condemned food counter fish for the last month. If I’d paid full price for the fish and seafood the ingredients for the dish would have cost £25.00. We spent just under fifteen pounds for our complete budget priced dish.

We’d stopped eating fish pie for years as it was so expensive to make. When we started to really cut back on the amount of money that we spent on food we discovered that fish is often heavily discounted. Now it’s a regular treat dish. Waitrose fish counter often has good bargains on a Sunday afternoon (after 3 o’clock) in Newmarket. The Tesco CFC puts fresh fish right on the bottom shelf (so it won’t drip onto other food). As you have to crouch down to find the fish a lot of people don’t even spot the bargains.

Thank goodness for the freezer. Storing fresh fish and then deluxe fish pies for future treats. Making fish pies is a palaver – this evening it took me two hours. But cooking in bulk saves time and energy in the long run. The secret ingredients are the decent amount of parsley, the shimmy of garlic and the anchovy essence. This evening I used full cream milk and I reckon that the sauce tasted much more deluxe. I reckon that our fish pies are much tastier and far cheaper than the excellent Waitrose ones which weigh in at about a fiver for two dainty portions.