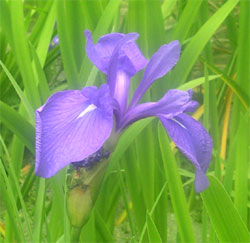 It’s easy to be selective and just ignore areas that don’t work well in a garden. I’m trying to concentrate on these patches at the moment rather than spend hours tending and polishing my favourite corners.

I must have spent a good two hours removing the brambles that have crept up through the yew hedging and were waving like valiant anarchists across the top. One specimen has evaded all attempts to restrict him and is still at large. I see him every morning, bobbing about above the hedge. So along with the daily hunt for the dreaded Lily Beetle, I am patrolling the hedge at ground level seeking his well hidden source.

Having knocked quite a few brambles on the head, I turned my attention to the bindweed. This has created a sleeping beauty feel to the back of the pond garden and covered the vine that rambles along the trellis. Removing bindweed stems and leaves was easy. Digging it out the roots was not such fun.

I have a pile of weeds, brambles and roots as long and as high as our garden table, which seats six people comfortably and ten with elbows in. Too much for me to burn in the incinerator dustbin. So tomorrow John will be in clover as, for the first time in months, he will be allowed to make a large bonfire. Fire extinguishers will be poised at the ready.

The bindweed was allowed to romp away over the past two years as only the nimblest human can squeeze through the border furthest from the beehives and avoid falling in the pond. There is the option of accessing the back of the pond from the other end but the thought of walking through the busy apiary puts most people off. Including me. I don’t want to garden in a bee suit and veil.

Also, who wants to tend an inhospitable, cranky border? The soil at the back of the pond area is very arid and only welcomes plants that thrive on super dry soil with little tending. Even Vinca major gave up after a year.

The vine was planted near the pump’s feed into the pond so gets the regular inevitable drips and seems to thrive.

I dug and sifted with little enthusiasm. Unlike Lot’s wife I kept my eye on the job in hand and concentrated on not falling in the pond or disturbing the bees. Hard, heavy, boring work.

Last weekend something made me look back at the garden from my vantage point behind the pond. I saw the view that only the bees have seen. I hadn’t twigged that a rose arch needs to be viewed from the side to be fully appreciated. I could also examine our exquisite blue irises in depth.

Fired up in an instant, I’m now planning a small bower at the back of the pond. Just a chair and a small table to hold a book and a glass of wine. I could cut a doorway though the yew hedge for easy access.

Suddenly I was digging and lifting bindweed roots at speed. Stopping every now and then to look, drift and dream.

“We shall not cease from exploration
And the end of all our exploring
Will be to arrive where we started
And know the place for the first time.”