Posted by Fiona Nevile in Jam Jelly and Preserves | 14 comments 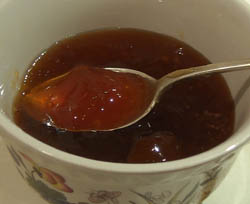 Last year I adapted the Delia recipe that we follow, removing 700g of oranges and replacing them with the same weight of sieved pulp. The result was excellent – a rich marmalade. Chunky Seville hand cut orange slices hanging in a delicious quincey orangey base. Unbelievably fruity, sultry and good.

We’ve guzzled this marmalade all year and agreed that it could do with more orange slices. So yesterday I followed the instructions for Delia’s Dark Chunky Marmalade  – by poaching the oranges they are so much easier to cut and prepare. Then I put 700g of quince pulp through the food mill and added this and an extra 1.4 kilos of sugar at the ‘add sugar stage’ of the marmalade. The ratio of sugar to oranges in Delia’s recipe is 2 to 1 – no wonder marmalade is so waist challenging.

I added the extra sugar incrementally until the marmalade had a similar sweetness to last year’s batch.  We don’t like marmalade to be too sweet. But you could add more sugar to taste. Just remember to stir it well to dissolve the sugar before you bring the pot to the boil for the long simmering stage.

If you do use Delia’s recipe for Dark Chunky Marmalade there is one point that is not very clear in the recipe. All the poaching liquid is used in the recipe not just the 570ml in the pectin saucepan. I also discovered if you tie the muslin loosely you can put two wooden spoons – diametrically opposed and twist them against each other to easily squeeze the muslin firmly without tears.