Spoils from the annual village fête

Posted by Fiona Nevile in Kitchen equipment, Save Money | 10 comments 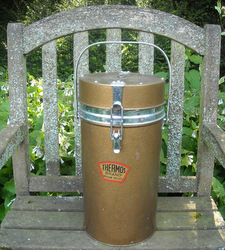 Yesterday was the Cheveley village fête. Held in aid of St Mary’s church and celebrating the 750th anniversary of the church.

To link in with this the organisers had given the fête a medieval theme and many of the organisers and stallholders wore medieval costumes. Danny was serving at the bar and claimed that his everyday clothes were so old that they were almost medieval.

Usually I serve on the bar too but this year I visited as a guest – which was great fun. Watching the Molly dancers and the falconry display and catching up with people who I hadn’t seen for ages.

The highlight of the church fête is poking through the plant stall, book stall and the White Elephant stall. Last year’s top bargain was the old Eltex greenhouse heater that kept things snug last winter and was much cheaper to run than my modern Eltex heater.

I have been drooling over the Shuttle Chef for months. If you want to save money on power one of these is a great piece of kit – they can even bakes cakes and bread. The flip side is that they are expensive. Having researched the Shuttle Chef in depth, I knew exactly how useful a giant thermos could be for slow cooked meals.

When I spotted this Thermos vacuum vessel in amongst the sports equipment my heart leapt. It was squeaky clean inside and looked in full working order. Unlike the Shuttle Chef this Thermos had sturdy clips on the lid so it could be transported easily. Its heavy weigh indicated that it would hold the heat for hours.

“How much do you want for this?” I asked the medieval king who was running the stand.
“How about a pound?”
I was thrilled. Even if it didn’t work I’d only gambled a pound. I lugged it quickly back to the cottage – it’s huge with a gallon capacity. There is very little information on early Thermos flasks on the internet. Ours was probably was made in the 1930’s as the ones from the 1950’s have plastic lids.

Yesterday a heavy shower bought me in from the garden and I decided to test out the Thermos. I filled it with boiling water and measured the temperature with my jam thermometer. At 12.20pm it was 194f/90c degrees and over seven hours later I unclipped the lid with some trepidation. At 19.45pm it was 158f/70c degrees! 22 hours later the temperature of the water is 45c. I’m really impressed.