One of the highlights of the veg growing year is the harvest of purple or white sprouting broccoli. OK they take a long time to mature – the plantlets go into the soil in early July and they are harvested from March the following year. But the flavour is wonderfully sweet – totally unlike the PSB available at great expense in the shops, which can be a bit bitter. This stir fry took advantage of the sprouting broccoli from our allotment. It also uses chicken left over from the Sunday roast and of course yacon from last year’s harvest. If...

Recipe for squid in marinara sauce over spaghetti

Posted in Fish and Seafood, Rice and Pasta | 4 comments

This may sound crazy but up until the past month or so I’ve always though of squid as a starter. It’s often knocked right down in price at the supermarket but I’ve tended to avoid it – my eye being on ingredients for a main course. When I made my yummy squid soup I suddenly realised that this seafood had enormous potential. Surely if soup could be this easy and this good there must be other ways to use squid? I spent a couple of hours researching squid as a pasta sauce. 95% of sauces used tomatoes so I decided to go with that. This is... 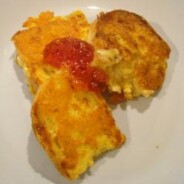 Reading a review of a biography of Eva Braun at the weekend, I discovered that I have something in common with Hitler. He rarely got up before midday. Since developing CFS a couple of years ago, I tend to spend my mornings in bed. Propped up with my laptop and the Min Pins I do a bit of reading, writing and planning. The latter is generally not plotting world domination but rather what I’m going to prepare for brunch. This morning it was going to be toasted chicken club sandwiches until D confessed that he had picked the carcass...

Posted in Fish and Seafood, Rice and Pasta | 3 comments

When I first noticed Pak Choi (bok choy or Peking cabbage) twinkling on the supermarket sheves, I wasn’t exactly sure what it was or how it would taste. Even though it seemed rather expensive it was attractive so I invested in a pack and rushed home. Simmered gently for a couple of minutes it was a revelation. Wilted upper leaves with crunchy fleshy ends. Clean tasting and yummy. We ate it as a vegetable on the side and later in stir fries. Surely in the right place this vegetable could really shine? This thought was put on the back...

When I lived at home with my mum, we always ate lunch – main course and pud. Supper was an ad hoc affair – we could have whatever we liked that from the bounty of the fridge and larder as long as we prepared it ourselves. Quite canny of my mum as she could put her feet up and enjoy the evening without having to cook a proper meal. One of my favourite supper snacks were baked eggs. Delicious and dead easy to make. If I dallied up in my room they were quick to prepare. We’d eat our supper on trays balanced on old coffin stools (don’t...

I’ve never been keen on beans, definitely was not one of the Beans means Heinz fans as a child. Even the recent change to Beanz hasn’t tempted me. In fact I was so out of the whole world of beans as a teenager that I didn’t even understand the flatulence jokes in Blazing Saddles. Now beans are almost considered the new ‘meat’. Economical, packed with goodness and promise. Some varieties can even be grown in UK gardens – come the revolution these could be a valuable source of protein. So I decided to experiment a bit with...

A great beef stir-fry need not have much meat. You can pad it out with most any vegetables you have to hand. Slice your beef thinly to 2mm bites and take care to cook the veggies starting with the tougher ones that may take longer.

Posted in Beef and Steak and Veal | 3 comments

Skirt of beef (also known as Flank Steak, Fajita Meat, Skirt Steak and Philadelphia Steak) is not well known in the UK. It has an excellent texture and flavour somewhere between sirloin and fillet steak. It can be used as a fried steak or here in a stir fry as well as in stews.