Recipe for squid in marinara sauce over spaghetti

Posted by Fiona Nevile in Fish and Seafood, Rice and Pasta | 4 comments 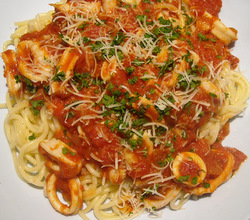 Squid in marinara sauce over spaghetti

This may sound crazy but up until the past month or so I’ve always though of squid as a starter. It’s often knocked right down in price at the supermarket but I’ve tended to avoid it – my eye being on ingredients for a main course.

When I made my yummy squid soup I suddenly realised that this seafood had enormous potential. Surely if soup could be this easy and this good there must be other ways to use squid?

I spent a couple of hours researching squid as a pasta sauce. 95% of sauces used tomatoes so I decided to go with that.

This is my version of squid in marinara sauce using ingredients that I had in the larder. It tastes fabulous, quite rich with complex notes. It is cheap to make and fairly low fat. At full price for the squid it would work out at a pound a head for three greedy people.

The main stumbling block when it comes to cooking squid is to cook it too long. I’ve discovered that there’s a simple rule for cooking squid so that it doesn’t become chewy and indigestible. Either cook it for under two minutes or over one hour – anything in between probably spells disaster. Simple.

The other guide if you are cooking your squid quickly is to watch it carefully as it cooks – it should turn from translucent to opaque when just cooked. Immediately it has done this whip it off the heat and serve.

Wash and prepare the squid. Rinsing it well and cutting it into 1cm rings. Leave to drain.

Let the sauce simmer gently for about 45 minutes, breaking up the tomatoes with a wooden spoon and letting the sauce thicken. Season to taste with sea salt and black pepper.

Meanwhile cook the spaghetti following the manufacturers instructions. When the spaghetti is ready, drain well and set aside while you cook the squid in the sauce. Make sure that the sauce is bubbling and add the squid. Stir the squid through the sauce until it becomes opaque – this should take under two minutes. Whip the sauce off the stove and pour over warmed plates of spaghetti. Garnish with Parmesan and parsley and serve immediately.