Update on Mrs Boss and the ducklings: two weeks old 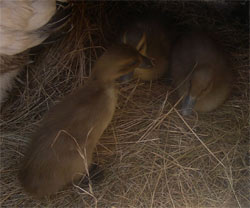 Since day one the ducklings have emptied a water fountain within a few hours. They play endlessly with water and sometimes drink a bit.

After a few days, S assured me that they would be fine with an adult water fountain. I filled and placed one in the castle grounds. Mrs Boss examined it carefully before calling to her brood. They sprang forward, put their bills into the water and raced round and round the fountain, within seconds the 1.5 litre fountain was three quarters full. Then two of them tried to jump in but the fountain lip was too small for swimming.

I had wondered why Mrs Boss was permanently damp and the castle looked like the changing rooms of a popular city swimming pool towards the end of the day.

S had said that they’d enjoy a splash pool. So I quickly installed a swimming pool (seed tray) in the castle grounds. Mrs Boss examined this, drank the water and must have announced that it was fresh as the ducklings leapt into the pool and shot about. At that stage it was shallow enough for a small webbed foot to touch the bottom so I reckoned that it was safe.

Mrs Boss didn’t dive in too. Chickens just drink water. So she potters by the side of the pool whilst her brood love it with total abandon.

It’s all about splashing and swimming and drinking and jumping and preening. They are entertained for hours and I was too until I realised that Mrs Boss was constantly drenched.

Then I started to worry. Mrs Boss is a bantam. She is small and delicate. Bantams are prone to colds and chills. Were the 24/7 water sports of her brood going to make her ill? Even when it rained the ducklings were out in the run with Mrs Boss standing patiently by, wet and bedraggled, with no umbrella.

And the nest where they slept was always soaking wet. Even if fresh hay was supplied twice a day.

The wire insert from an old grill pan raised the family nest a couple of centimetres from the wet floor. And scattered wood shavings soaked up the water beneath. Fresh hay every evening gave Mrs Boss and the ducklings a dry nest. I was a bit worried that the small webbed feet wouldn’t be able to negotiate the wire mesh but the ducklings took it in their stride. Like the keets, they love clean sheets and generally bounce up and down and dive into the fresh hay.

I kept the water fountain in the castle grounds, gave them dry hay just before lights out and just left a saucer of water in the castle when I lowered the portcullis at night.

Perhaps ducks exude moisture. The hay bed is always damp in the morning. But not quite so wet as before. 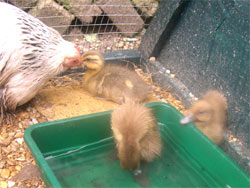 Mrs Boss and Freddie are very close. Perhaps this has made Tipex and Eric more adventurous as they were the first to spring into the castle pool. They all like to snuggle together during the day and they all cuddle up to Mrs Boss at night with their bills pressed deep under her wing.

The ducklings are now two weeks old. As laid back as three snails on a gap year but surprisingly quick off the mark if worms or shredded fresh greens appear in the castle grounds. They don’t have the one-upmanship of the keets. Their movie is far simpler than the grand keet opera epic that kept us entertained all last summer. Perhaps it’s because there are only three but I reckon that ducks are more mellow, from the word go.

With their wonderful almond eyes and delicate webbed feet Freddie, Tipex and Eric Boss are enchanting. Watching them grow up is a joy. I race down to the castle every morning to draw up the portculis and observe as the ducklindgs spill out with Mrs Boss in tow.