Navigation Menu
Home » Featured » What is the setting point for jam and jelly?

What is the setting point for jam and jelly? 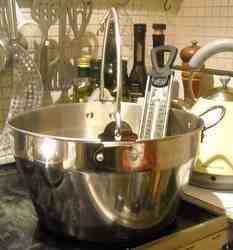 Maslin pan with thermometer on our busy hob

Earlier this summer I decided to use my jam thermometer to help me find the setting point of jam. To my delight I noticed that it was marked ‘JAM’ at 105°c/220°f.
“This is going to be so easy.” I thought. “No more trailing back and forth to the fridge waiting for a tardy batch to set.”

Danny had bought me a 9 litre Maslin pan and this was the day it was christened. Up until then I had been using a very large non stick saucepan. So I clipped the thermometer to the side of the pan and feeling like a pro started to boil the jam.

I waited and waited, watching the jam get thicker and more gloopy. All the signs indicated that the jam was setting – coating the spoon, a thick residue on the sides of the pan but I persisted – determined to believe that a temperature of  105°c would produce perfect and tasty jam. I did eventually lose a bit of faith in the thermometer. Perhaps the jam was hotter in the centre of the pan? I moved the thermometer about but the temperature remained the same.

When the jam eventually reached the magic JAM level I took the pan off the stove. I didn’t need to test for a set – it was like glue and all the fresh fruity taste had gone. In fact the jam stuck so hard to the thermometer that it rubbed off of most the markings for the lower temperatures.

I did a bit of research on the Internet and discovered that 105°c is generally seen to be the setting point for jam. What had gone wrong? I checked the reviews for the Tala jam thermometer but no mention was made of  temperature faults. The reviewers did point out that the temperature points on the thermometer could easily be wiped away. Next time I’ll invest in a thermometer with etched points. The jam went down the loo and took a few days to shift. Danny was a bit irritated.

So much so that I wanted to chuck the thermometer over the fence but luckily kept it as I’ve discovered that our jam thermometer is useful as an indication that a jam/jelly is nearing setting point. When the temperature reaches 102°c, I stop whatever I’m doing and hover by the pan testing for set every five minutes on a plate from the freezer. The set happens somewhere between 102°c – 103°c, usually after ten minutes or so. I’d love to hear the temperatures that you use to gauge the setting point for jam.

By the way I thoroughly recommend investing in a Maslin pan

if you are keen on making preserves. Apart from the thermometer fiasco all my jams, jellies and chutneys have been much easier to make this year. Perhaps is just that the design of the pan – a larger surface area compared to the base. Even the “glue 105°c jam” didn’t burn the base. This combined with a Silicone Spatula

means that not a drop of jam is wasted and washed away in the sink.

Up until now I thought that Maslin pans were an unnecessary expense. Like my attitude to the simple but efficient jam funnel I have been proved wrong, yet again. The latter is used constantly for putting rice/beans/lentils/whatever into jars. And when I make preserves so little is wasted that it paid for itself in no time. And now I wouldn’t give up my Maslin pan without a strenuous, elongated fight.