How to make a temporary vase for cut flowers 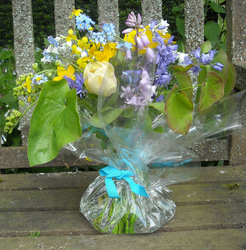 Photo: Flowers in a tempoarary vase

I invested in Sarah Raven’s The Cutting Garden: Growing and Arranging Garden Flowers

a while ago. It’s a brilliant inspirational book if you are raising flowers to cut for the house or to sell. A perfect reference guide. Recently I also bought her later book Grow Your Own Cut Flowers.

This is a much simpler book than The Cutting Garden, listing just her favourite flowers and bulbs. But there are new tips and tricks and I’ve enjoyed lolling on the swing seat with the Min Pins and immersing myself in its pages.

If I was going to recommend just one book it would be The Cutting Garden as it is a really comprehensive book and lists thousands of flowers.

My mum is in hospital at the moment having a knee replaced. I learnt from Grow Your Own Cut Flowers that you can condition most flowers by searing the stems in boiling water for 20-30 seconds to make them last longer. Even the delicate Californian poppy can last for five days when seared – incidentally she tips that if you dead head this plant it will flower for months. So I had a sniff around the garden, picked this bunch and seared the stems.

I spotted a 100 meter role of florists quality cellophane for £19.50 on Sarah Raven’s website and ordered it with some seeds that I couldn’t find elsewhere – the postage on this site is the same for whatever you order. You can buy Cellophane Wrap

from Amazon for less but the postage is quite steep. I have been using it to wrap posies but yesterday discovered Sarah Raven’s method of using the cellophane as a temporary vase.

This is basically a large square of cellophane (obviously it has to be a waterproof type and not the standard small roll that you find in craft shops). I pushed the centre of the square of cellophane into a small saucepan and filled the well with water and popped in the flowers which were held together with an elastic band. I secured the cellophane with tape and covered that with a ribbon, knotted and then tied with a bow.

The flowers travelled well – upright in the back of the car. My mum was delighted with the flowers – a waft of summer beside her bed.

Apparently the flowers can live in the temporary vase for a couple of days but will last longer in a proper vase.