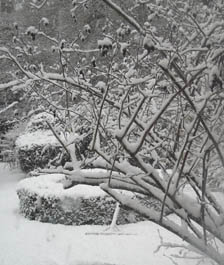 As long as I don’t have to drive in it, I love the snow. I still get excited when I see the first flakes falling. Snow conjures up so many memories, like the time ‘a bigger boy’ put a snow ball down my neck. I can still feel the dreadful chill as it slowly slid down beneath my vest and lodged in my waistband. Longing to rip off my snow suit and remove the chilly block but not wanting to look foolish I let it thaw against my skin.

At boarding school as a teenager when we got up at dawn to make a huge snowball. We blocked the drive so the teachers had to tramp up the mile to school. It took ten of us to roll it and they never discovered who was behind the dastardly plot.

that gradually fell to pieces over the course of the afternoon. We crammed on board – two adults and a child and Fly zipped into my jacket. The sun on the snow and the rush of air and the pleasure of being totally caught up in the moment.

The romance of a surprise fall of snow in London at the start of a new love affair.  We‘d gone to the movies just to be able to kiss and whisper in the dark and stepped out of the dark to a white bright world.

And driving back from London to my first country cottage on snowy nights when the flakes turned into white ribbons streaming out of the darkness towards my car.

Most of all snow reminds me of the scene in Doctor Zhivago where they escape to the house in the woods and everything inside is frosted and quite beautiful. Like a secret place in a timeless dream.

This afternoon it snowed heavily again. I put on my aunt’s old winter jacket pulled on some blue hand knitted gloves and opened the back door.  Feeling just five years old again I stepped into the snow silence of the garden.