Posted by Fiona Nevile in Pheasant and Game | 8 comments 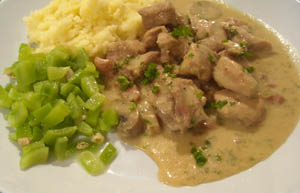 Finding myself with 600g of diced wild rabbit and no pheasant to go into a game casserole, I decided to glide onto the internet for inspiration and found this delicious recipe on We Are Never Full. Unfortunately I didn’t have some essential ingredients such as bacon so I made my own version using the tarragon, mushrooms, white wine and cream as a starting point.

The slow cooker was busy cooking the shin of beef disguised as a pheasant so I cooked the rabbit very slowly on the stove top. It took over three hours and was wonderful – the best rabbit dish that I’ve ever tasted. This would feed 3 or 4 normal people. Danny had four helpings, I had one and we fought over the last spoonful.

600g of diced wild rabbit
2 tbsp of plain flour
200g of ordinary mushrooms (remove the stalks and slice into disks. Cut the mushrooms in half and slice roughly)
50g of salami (use a chunk from a whole salami – remove the skin and cut into small cubes a half centimetre square)
2-3 tsp of garlic granules
1 tsp of anchovy essence
1 tsp of dried tarragon
800ml of stock made with 2 tsp of vegetable stock powder
To be added at the end:
1 tbsp of dry white wine
3 tbsp of single cream
Fresh ground black pepper and sea salt to season
2 tbsp of fresh chopped parsley

Roll the diced rabbit in plain flour and put in a large heavy bottomed saucepan.

Add the chopped mushrooms, salami, garlic, tarragon, anchovy essence and vegetable stock. Stir well and bring slowly to boiling point then turn down the heat to the minimum and simmer (lid on) for about 3 hours until the rabbit is tender.

Strain the rabbit (or remove with a slotted spoon) and leave in a warm place whilst you reduce the juices.

Boil the juices hard with the lid off until the sauce has reduced to a third. Let the sauce cool a little before adding the white wine, half the parsley and the cream. Gently simmer, stirring all the time to let the cream thicken. Season to taste.

Pour the sauce over the rabbit, scatter with the rest of the parsley and serve with mashed potatoes and green beans.