Posted by Fiona Nevile in Jam Jelly and Preserves | 20 comments 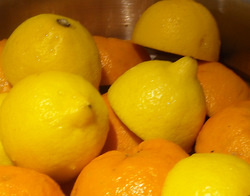 When I was a decorator I’d often dream about decorating as it was an integral part of my life. I’d often wake exhausted in the morning having been ‘decorating’ all night. Decorating was the backbone to all these dreams overlaid with the classic dramas. Anxiety dreams – would I finish painting the room in the allotted time? Adventure dreams – scaling roofs and walls with a pot of paint and a brush. Travel dreams – decorating around the world. Even frightening dreams – decorating alone in a haunted house.

The decorating dreams stopped a few months ago. They have been replaced with gardening and cooking dreams. And more recently the gate side stand has started to make an appearance. No dramas here though – to date the stand has a passive benevolent role. I woke just now having dreamt that I was pottering in the front garden and a man bought some marmalade and murmured his thanks as he dropped a pound into the cash box. The coin fell onto a pile of other cash with a sonorous thud. A happy sound.

The gate side stand has become a focus for my day. Planning, planting and making new lines. In the spring I will sell baby vegetable plants, herbs and vegetables from the garden. I’m also going to make some greetings cards – these can be made from my bed. The focus now is on marmalade and Valentines Day.

As I wanted a range of marmalade on the stand I thought it would be fun to make a three fruit marmalade. Even though this recipe only includes one ruby grapefruit there is a superb grapefruity edge to this marmalade. I included the rind of all the fruit which means that the shreds are three slightly different colours and look pretty when spread on toast.

3lbs/1.3 kilos of Seville oranges
12.5ozs/360g of ruby grapefruit/1 large grapefruit
9.5ozs/275g of lemons/2 small lemons
8lbs 8ozs/3.870 white granulated sugar/ratio of 2:1 to the fruit
Water to cover the fruit – mine was 6 pints/3.4 litres
Method:
Scrub the oranges and lemons to remove any wax. Put the fruit in a large heavy bottomed saucepan and cover with the water. Put the lid on and bring to simmering point. Then turn the heat down very low and slip a piece of aluminium foil under the lid to ensure a good seal. Simmer very gently for 3 hours until the fruit is soft.  Allow to cool overnight in the poaching liquid.
The next day cut the oranges and lemons in half and scoop out the flesh and pips into a separate saucepan. Add about a pint/570 millilitres of the poaching juice and simmer gently for at least half an hour and then pour into a sieve lined with muslin set over a bowl.
Cut the halves of oranges, lemons and grapefruit in half again and remove the pith by scraping with the edge of a metal spoon. When this is done rinse the peel and cut into fine strips. I set the skins in blocks cutting about 8 skins at a time.
By this stage the pulp liquid will have almost dripped through but it’s worth giving it an extra squeeze. Knot the muslin and pass two wooden spoons (juxtaposed) beneath the knots turn the spoons against each other which will squeeze out any remaining juice with little effort.
Add enough poaching liquid to the pectin rich juice and check that you still have 6 pints/3.4 litres of juice. Top it up with cold water if necessary.
Bring the peel gently to simmering point in the poaching liquid add the sugar and stir until it is completely dissolved. Taste the mixture – if it’s too tart for your taste add a little more sugar stirring again until it is completely dissolved. Then bring the marmalade to a rolling boil.
After 15 minutes test for a set (see Tips and Tricks below). If the marmalade is not set bring back to a rolling boil and test every five minutes or so. Just before the marmalade reaches setting point it moves from forming thousands if tiny bubbles to a much more gloopy boil.
Using a ladle and a funnel pour into hot sterilised jars and seal immediately. Leave to stand overnight and label the next day.
If your peel wants to rise to the top of the jars keep on turning the jars every ten minutes or so and the peel will settle evenly distributed within the jar.
Tips and tricks:
Marmalade “set” or “setting point”:
Getting the right set can be tricky. I have tried using a jam thermometer but find it easier to use the following method. Before you start to make the marmalade, put a couple of plates in the fridge so that the warm marmalade can be drizzled onto a cold plate (when we make marmalade we often forget to return the plate to the fridge between tests, using two plates means that you have a spare cold plate). Return the plate to the fridge to cool for approx two minutes. It has set when you run your finger through it and leave a crinkly track mark. If after two minutes the cooled jam is too liquid, continue to boil the marmalade, testing it every few minutes until you have the right set. The marmalade is far more delicious if it is slightly runny.
Sterilising the jars:
We collect jars all year round for our jelly, chutney and jam making sessions. I try to soak off labels and store the clean jars and metal plastic coated screw-top lids in an accessible place. The sterilising method that we used is simple. Just before making the jam, I quickly wash and rinse the jars and place them upside down in a cold oven. Set the temperature to 160c/140c for fan assisted. When the oven has reached the right temperature I turn off the heat. The jars will stay warm for quite a while. I only use plastic lined lids for preserves as the all-metal lids can go rusty. I boil these for five minutes in water to sterilise them. If I use Le Parfait jars, I do the same with the rubber rings.