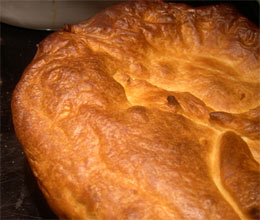 It’s the time of year when we start to clear the freezer of game given to us during the shooting season. We tend to keep our eyes peeled for cut price game.  Waitrose stocks rabbit, venison, pigeon, partridge and quail. All quite expensive but often marked down to half the original price –these are brought home and secreted in the freezer until we have the perfect ingredients for this subtle game pie filling.

Our favourite combination is venison, rabbit and pheasant. This pads out the pheasant and gives a tremendous range and depth of flavour. Our pies are game heavy, with a little carrot and mushrooms. Our prize for cutting down on meat during the week. But they don’t taste very ‘gamey’. At the end of the season we and most people that we know are suffering from Phesantitsis.- a surfeit of pheasant over the winter months.

We developed this game dish to be easy on the palate. A subtle echo of the winter’s bounty. A game pie that would beckon most people back from the brink.

We often make pies with a béchamel ‘gravy’ and quite few vegetables – mild, tasty food. This week I wanted to create something a bit more raunchy. Thickened with pureed dark gilled mushrooms. A dish that would have a spring, chilly evening appeal.

The oatmeal was an echo of Sid’s (Chef at Large) meat and oatmeal stew (highly recommended) and just a handful of oatmeal took away the bitterness that often comes with game and rounded the dish perfectly. The pot barley also added to this softness.

Ideally one of the meat ingredients in this pie filling needs to have bones. For us it’s always the pheasant as I hang, gut and skin and toss most into the freezer. The bones improve the stock immensely. The addition of a good redcurrant jelly or giant slug of sloe gin is essential. Like most slow cooked dishes, this pie filling benefits from a day in the fridge to allow the flavours to develop even more. A perfect cook now eat later dish.

I love meat pies with shortcrust pastry Danny longs for the lightest puff pastry to soak up the gravy. The former is whizzed in the food processor for pennies and the latter is bought. I’ve discovered that Jus-Rol now make an all butter pastry to die for (including the price £1.49). But well worth every penny for topping the slow cooked game pie filling. One pack will provide enough pastry for half the filling. This recipe makes enough filling for about 10-12 portions. We freeze it in batches and hoik out a slab when we need a gentle yet chic game fix. Perfect supper party food for people who are uncertain about game – as seductive as the sudden glimmer of sunshine on water. The game notes are just that, an echo of an almost forgotten aria rather than the complete opera with the spotlight in the bumptious, plump pheasant Diva and beautiful but raucous mate.

Pastry – either buy your pastry (1 pack of Jus-Roll will give you enough for a pie for six people or make your own shortcrust (a great food processor method is here and you need to double it).

The mushrooms, lemon juice, parsley, sloe gin or jelly and ground black pepper are added at the end.