Posted by Fiona Nevile in Chutney and Pickles | 43 comments 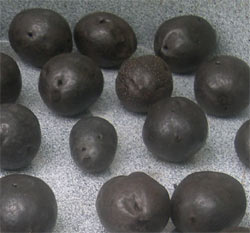 Good pickled walnuts are a wonderful accompaniment to strong cheese or cold meat. They are an English tradition. Often they are made with malt vinegar and can be very challenging to eat. This year I was determined to try to make the ultimate pickled walnut.

Part one of the challenge can be perused here.

After the two week saline soak (changing the solution after one week) I rinsed the walnuts and moved them down to the greenhouse to dry. This can take from 3-5 days. They turn a greyish black quite quickly. Not knowing how black the walnuts should be, I gave them a five day rest before starting the pickling process. As I had used our entire tranche of roasting trays, the pickling process had to start immediately on day five. D needed the trays to cook the Sunday roast.

Wishing to avoid expensive litigation involving claims for extensive dental repairs, I tested the walnuts for a final time. They were divided into four piles. Very soft, softish, firmish and hard. The latter were tossed immediately and the firmish will be devoured last. I’m hoping that the pickling process may soften them a little more. Next year I’ll be picking well before the end of June.

I’d researched and endlessly mulled over the recipes for my pickling spice. There aren’t a lot of pickled walnut recipes out there. I studied HFW’s one in The River Cottage Cookbook and eventually discovered this great site written by a pickled walnut fanatic back in 2005. Some of the links have died on the collection of pickling recipes. But enough had survived for me to get some pointers and the list of pickled walnuts for sale gave me a clear idea of the essential ingredient – vinegar. The rest is up to you. I did spot that many of the older recipes included garlic.

I made two pickling vinegars, one using white wine vinegar and the other cider vinegar. Very different. They both tasted good with a satisfying depth of flavour. But how will they combine with the walnuts and what will happen when they mature? Only time will tell. The results will be posted well before the start of the green walnut picking season next year.

I pulled out all the stops for these as they are my entries for Magic Cochin’s Inter Blog Great Pickled Walnut Challenge that will take place sometime in December. Meanwhile the jars are maturing on the new shelves in the barn. I’m still clearing up from the landslide disaster on rainy days. It could take some time.

In the end I had roughly 50 walnuts ready to be pickled and needed 2.5 litres of pickling spice to cover them. Here are my recipes.

Bring all the ingredients to simmering point and barely simmer for about an hour. Stir briskly and using a ladle and funnel, cover the walnuts with the hot spiced vinegar and seal the jars immediately. Leave to mature for 3 months.

Bring all the ingredients to simmering point and barely simmer for about an hour. Stir briskly and using a ladle and funnel, cover the walnuts with the hot spiced vinegar and seal the jars immediately. Leave to mature for 3 months.